Snails are cute. The eclectic, colorful collection of snails in this sweet and entertaining animated underdog tale are downright adorable. 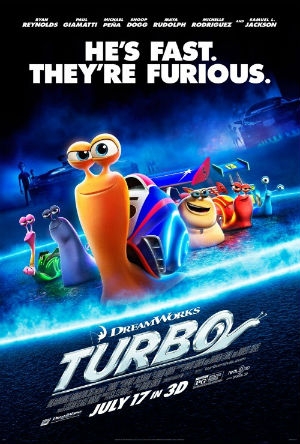 Turbo (née Theo and voiced by Ryan Reynolds) is a snail with a dream: he wants to be fast. So fast that he might stand shoulder to shell with his idol, formidable French-Canadian Formula 1 racer Guy Gagné (voiced by Bill Hader). But Turbo’s garden-variety life and naysaying older brother, Chet (voiced by Paul Giamatti), put the brakes on his seemingly outlandish notions of on-track glory.

Until, that is, a despondent Turbo is accidentally injected with nitrous oxide, and the little snail that everyone thought couldn’t suddenly becomes the super-fast snail that most definitely could. Aided by a kindly taco-stand owner (voiced by Michael Peña) and a rag-tag group of “racing snails” (voiced by the likes of Samuel L. Jackson, Maya Rudolph and Snoop Dogg), Turbo sets his sights on the Indy 500 and racing Gagné.

Blessed with epic levels of clever and cuteness, Dreamworks’ latest offering is a spirited hour and a half of good, clean family fun with a nice message – don’t be afraid to dream whatever dream you’d like – nestled at its core. Kudos to the animators and production designers for creating a vibrant, interesting backdrop for all the action. Each snail has been given a distinct look and personality, and the voice cast does a great job of making their onscreen alter egos memorable. Reynolds still manages to deliver his signature cadence and sarcastic patter, and Giamatti is the perfect, exasperated foil. (Too bad Bill Hader completely blows the French-Canadian accent, which he seems to think should sound alternately Italian and Spanish. Ah well.)

The film clips along nicely, and has enough humor to keep both grown-ups and the pint-sized set happy. Like many films in this genre, I’m not sure if it really needs to be in 3D – the glasses are clunky and there isn’t anything especially 3D-tastic in the movie – but it didn’t bother me as much as it has during other screenings. If you’re seeking a delightful escape from the summer heat – or summer blockbusters where stuff blows up – Turbo makes for a cool distraction.

Among the usual special features on the Blu-ray are the usual, like a deleted scene, some music videos, a storyboard of the big race, sneak peeks at other Dreamworks animated films, and a trailer. If I were a kid, though, the one that I would love would be the “Be An Artist!” group of featurettes, where Dave Burgess, Head of Character Animation, shows us how to draw various versions of Turbo as well as some of the other characters.