What happens when you’re an exhausted, stressed-out mother of three, who feels like you’ve reached the end of your rope as far as coping mechanisms go, and a saintly young woman floats into your life to help you save yourself?

That’s the premise of the latest film from the filmmaking team of director Jason Reitman and Oscar-winning screenwriter Diablo Cody. And the result isn’t actually a sequel to Young Adult but does kind of feel a bit like its second-cousin. 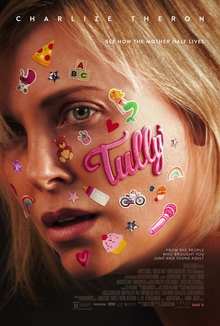 Charlize Theron stars as Marlo, the aforementioned beleaguered, desperately-seeking-sleep mom, who’s just given birth to child #3 and is about ready to snap due to the mounting pressures of child-rearing – especially when it comes to her young son (Asher Miles Fallica) with behavioral issues – and her increasingly inert relationship with her fairly useless husband (Ron Livingston). When her well-off brother (Mark Duplass) suggests hiring a night nurse to take some of the responsibility off Marlo’s shoulders for a few hours each day, she balks.

But when a bohemian, free-spirited young woman named Tully (Mackenzie Davis) shows up at her door one evening, ready to assume night-nurse duties, Marlo relents. Weirdly intrusive and overly familiar at first, Tully gradually wins Marlo over, becoming an invaluable help. But as their bond grows, and Marlo begins to unclench, she also starts to question the path she’s chosen in life.

Delivering an unflinching look at motherhood, Tully is at times funny, at times moving and at times predictable. (I correctly guessed the “twist” fairly early on.) Theron and Davis have fantastic chemistry and their relationship forms the axis around which the entire film revolves, but the latter completely outshines her co-star. For me, and despite the early raves, Theron was never completely believable as her character – I always saw shades of “acting” in her performance, and there was zero spark between her and Livingston. But Davis knocked it out of the park, turning in a warm, engaging, mysterious character that makes the audience want to lean in to learn more. And, I guess, maybe that’s the point: Marlo is meant to push viewers away, and Tully is there to draw them back in.

The film is nicely lean, both in terms of characters (there really aren’t that many) and storyline (it’s pretty straightforward), and the writing is unsurprisingly sharp and smart, but I did find myself wanting a bit more. The climax comes fairly abruptly, and perhaps drawing things out a bit longer would have felt more satisfying for me. I’m not entirely sure, but I know I didn’t leave the theater thinking, “That was awesome!” More like, “Oh, that was… fine.” The film is only 96 minutes long, so there was certainly room to flesh things out a bit more.

Although released just before Mother’s Day, one caveat for filmgoers: I’m not sure this is exactly a Mother’s Day movie. While it does celebrate a troubled mom’s self-discovery and self-acceptance, I wouldn’t label it a “feel-good film.” It’s good, just not great. 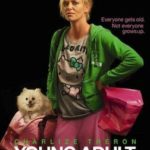