This is an unabashed, epic boy movie. 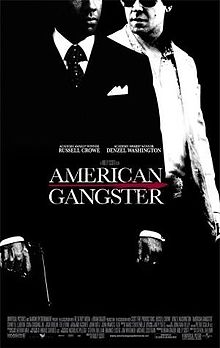 It’s beefy, both in running time and content, and filled from open to close with bad guys, good buys, flying bullets, violence, drugs, murder, chase sequences and some stellar acting from its two boy-movie superstars, Denzel Washington and Russell Crowe…all under the supervision of boy-movie megadirector Ridley Scott. Nevermind that it’s also a true story.

Washington is Harlem gangster Frank Lucas, who rose to fame in the late 1960s and early 1970s for his all-encompassing command of the heroin trade in the area. Through contacts in the U.S. military, he had pure heroin imported from Vietnam to the States inside the coffins of dead soldiers. He cut it and sold it at bargain-basement prices, amassing an enormous fortune – and countless high-profile friends, including athletes, celebrities and the like – in the process. However seedy, his was an empire built from the ground up through the sheer force of his vision and he reaped plenty of rewards.

On the other side of the law is New Jersey cop Richie Roberts (Russell Crowe), a womanizing officer notorious for voluntarily turning over close to $1 million of found drug money belonging to corrupt officers. Richie’s got a wealth of personal problems – a divorce and custody battle with his ex (Carla Gugino), for starters – and is studying to become a lawyer, but when he gets wind of Frank’s operation he senses this could be the big score that redefines his law-enforcement career. It becomes his sole mission to bring the entire Frank Lucas empire to its knees.

What unfolds is a very good, but very, very long (two hours and 40 minutes!), story of one man’s meteoric rise through doing bad things, and one man’s downfall for doing good…which he hopes to remedy by doing more good. Along the way, the body count rises in direct proportion to the elapsed time, and the interpersonal repercussions of each character’s journey come to light – Frank enlists his entire family (because they can be trusted) to help run his trade; Richie loses his for the same cause. Supporting players also orbit the proceedings and color the landscape, including Josh Brolin as a menacing detective on the take, Cuba Gooding Jr. as drug kingpin Nicky “Superfly” Barnes, Armand Assante as Italian crimelord Dominic Cattano and Chiwetel Ejiofor as Frank’s eager brother, Huey. And everyone, from the leads on down the ranks, is in top form throughout.

My only real issue is the glamorization of Frank Lucas. The filmmakers and actors have gone out of their way to say that American Gangster *doesn’t* celebrate Frank in a way that would suggest running a huge drug empire is a fantastic career choice…but the film does exactly that. Thanks, in part, to Washington being surprisingly likable in the role (and, thus, the audience actually rooting for him), it’s hard to see Frank as someone to be condemned. When he takes revenge on those who have done him wrong – smashing someone’s head in, shooting someone else point-blank in the face, whatever – some people in the audience cheered. Sure, there are scenes demonstrating the downside of the drug trade (junkies in squalid conditions or overdosed), but they pale in comparison to the number of scenes showing Frank lavishing gifts on his family and friends, hanging out with the rich and famous, and doing good things for his community (e.g., handing out free turkeys at Thanksgiving). And, by the time the film winds to a close and a smiling Frank is working alongside Richie on a mutually beneficial effort, it was as though all his evil-doing, all his nefarious dealings and sinister practices, have been forgiven.

Hopefully, more impressionable audiences will be smart enough to see the cautionary tale that lurks beneath the more questionable surface of American Gangster. It’s a very strong film, but one that walks a fine line between condemning its central criminal figure and applauding him.