A Guide to Recognizing Your Saints

This sometimes-great and sometimes-not-so-great debut from writer-director Dito Monteil isn’t so much a sum of its parts as it is a bunch of powerful parts pasted together in an awkward, yet strangely appropriate, way. 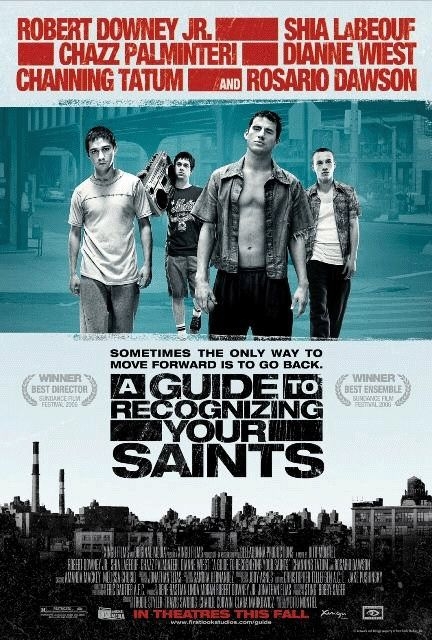 Based on his own memoirs, Monteil’s drama is told in profanity-laden (seriously, I wonder how man f**ks are in this film!) flashback by an adult Dito (Robert Downey Jr.), an author who returns to the neighborhood after years of estrangement from his parents and friends. The bulk of the film’s action centers primarily on the summer of 1986 in Astoria, Queens, when a teenage Dito (Shia LaBeouf) and his pals raise a lot of Hell, get into trouble, try to date girls and, eventually, encounter tragedy and heartache. The key players in Dito’s coming of age are his well-respected father, Monty (Chazz Palminteri), and Dito’s best friend, the hulking brute Antonio (Channing Tatum), whose first reaction to any dispute is always to beat the living crap out of someone. Despite their “guidance,” Dito’s life – like those of his friends – is slowly spiraling out of control and into the toilet, so when the new kid in school – a thoughtful Scottish teen named Mike (Martin Compston) – becomes Dito’s new friend, a world of possibilities beyond the ‘hood begin to emerge. Unfortunately, Dito’s dreams quickly run face first into the expectations of his family and friends, who can’t understand why he’d want out of his life or even think about leaving.

As mentioned, there are plenty of great things about this film. For starters, there are some scenes of such raw, heartbreaking power that I almost started to cry; moments of sheer brilliance executed in a completely natural, unaffected way. Ditto for some unbelievably taut and tense scenes (the boys confront the pint-sized little brother of their nemesis, for example), that I was on the edge of my seat, prepared to watch with my interlaced fingers over my eyes. There’s also Tatum’s astonishing performance. Known, until now, for comparatively innocuous fare like She’s the Man and Step Up, Tatum proves his mettle with a character who’s at once so brutal and yet so hurt. Palminteri and Dianne Wiest are perpetually sad and tired as Dito’s parents, and LaBeouf – though a smidge hammy – makes for an engaging hero.

But the film as a whole is very choppy and all-over-the-map. Screen sequences are sometimes assembled without rhyme or reason, and the result makes it feel like just a bunch of random scenes edited together incoherently. The flashback/present-day structure doesn’t work, either, mainly because we never really know why Dito’s stayed away for so long, or what happened to eventually facilitate his departure, or anything that might add resonance to the action that takes place in present day. It’s like a key chunk of information is missing. We know Dito must have left home at some point (after the events of the flashbacks), but why hasn’t he spoken to his parents? Or his friends? How long has it really been? And why has it been so long? Downey’s narration is also distracting and unnecessary.

Rosario Dawson appears briefly for a glorified cameo as the adult version of Dito’s teenage girlfriend. She’s in the film for all of a scene and a half, and seems to be there solely for some added marquee value because her character isn’t really relevant as an adult, and she serves no purpose in the story. Even less relevant is a pointless scene involving adult Dito visiting adult Antonio (played with inexplicable pointlessness by Eric Roberts!) – why is it even in there??? All it does is demonstrate how little Roberts looks, sounds or acts like the younger actor playing the same character as a teenager.

A better bet all around might have been for Monteil to set his entire film solely in 1986, scrap the “big-name” (?) cameos, clean up the film’s structure and skip the past vs. present book-ending that only emphasized the superiority of what happened before over what happened later.