Anacondas: The Hunt For The Blood Orchid

This is one of those straight-to-video movies that should have gone straight to video. 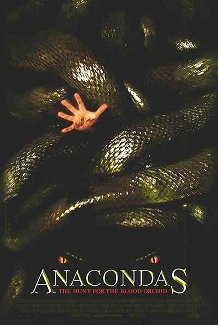 But apparently someone somewhere thought maybe, just maybe, if they dumped it into the cinematic wasteland that is late-August, it might ring up a little box office change.  So here it is. On the big screen. Where you can laugh and point at its twenty-foot-high (or more, depending on how big screens are at your local theaters) ridiculousness.

First of all, don’t even bother trying to suspend your disbelief. Either go to the movie without any kind of belief whatsoever, or just surrender it as the film unspools…because heaven knows the filmmakers don’t seem to make any effort to create something other than a schlocky cheesefest that no one could possibly take seriously.

As the title so eloquently explains, the main gist of the movie is a search for a rare “blood orchid,” which only blooms every seven years. Coincidentally enough, the exotic wonder-flower – which acts as something of a fountain of youth and can not only prevent aging, but can also cure cancer!!! – is blooming for another two weeks in Borneo. So, knapsacks slung over their shoulders and eyes on their collective watch, a team of researchers and pharmaceutical-firm execs set out for the jungle. Among them are the stock characters: the spunky blonde named Sam (KaDee Strickland, whose name is spelled with misplaced creative vapidity not seen since Sarah Jessica Parker’s fictional SanDeE* in L.A. Story), the determined scientist (Matthew Marsden) whose thirst for greatness quickly clouds his ability to reason, the hyperkinetic whiz kid (Eugene Byrd) and the smouldering hunk (Nicholas Gonzalez). Morris Chestnut, the only actor in the film anyone’s ever heard of, goes slumming as one of the group’s leaders, but I’ll spare him further embarrassment by leaving him out of this review.

Once the group arrives in Borneo, their expedition is taken over by Bill Johnson (Johnny Messner). Bill Johnson! Now if that’s not an exciting action-film name, I don’t know what is! Messner’s Bill is so over-the-top that people started giggling almost from the get-go. He struts around, unshaven but with his waxed chest puffed out, like a surly, angry, tattooed Jeff Probst. I half expected him to extinguish someone’s torch before the end of the movie. Bill’s been around. He’s a former special-forces operative, something that was explained in a lame, expository scene to HOWLS (howls, not twitters, not snickers, HOWLS) of laughter from the audience. (By that point in the film, though, people were *heartily* laughing out loud a lot.)

Anyway, long story short: the blood orchids aren’t the only things in the jungle. Seems there’s also a massive number of pesky, gargantuan anaconda snakes, who don’t actually get a whole lot of screen time. But CGI effects are expensive, so maybe the filmmakers were trying to save a few bucks by using them sparingly. The snakes slither around in water, on rooftops, through trees and underground. They’re always hungry…and guess what? It’s also MATING SEASON! (cue: more screams of laughter from the audience)

So, it’s researchers + angry Jeff Probst vs. lots of big snakes. And that’s about it. The movie is essentially one long, laborious, preposterous, mishap-laden, unintentionally hysterical walk through the jungle. Not surprisingly, bad things happen, but the walk continues, and all the while the audience wonders how any of these actors could have ever thought that making this movie would be an excellent career move. What makes it so absurd is the seriousness with which everyone seems to tackle their roles. Half the time, it almost seems like these actors all believed they were in a great movie. (Note: um, not so much, guys.) That said, watching them spew über-cheesy dialogue in a super-intense, filled-with-conviction way only made it that much funnier.

If you’re actually thinking about seeing Anacondas, please do so ironically. Go because you want to experience a pure, fromage-riffic spectacle. If you go because you think it might be one of those Open Water-like sleeper hits, you’ll be sorely disappointed. Amused, but disappointed.