Though I’m not sure anyone was really clamoring for a big-screen recreation of the iconic 1973 tennis match between Billie Jean King and Bobby Riggs, this pleasant-enough dramedy sheds some light on the real-life off-the-court dramas going on in the players’ respective lives when they faced off 44 years ago.
By Vickieon January 27, 2018
0 Comments
Our Rating 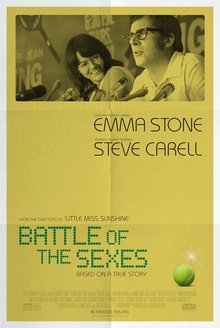 For Billie (Emma Stone), the #1 ranked female tennis player at the time, the struggle is with her sexuality. Married to her strapping husband Larry (Austin Stowell), Billie nonetheless finds herself falling for pretty hairdresser Marilyn (Andrea Riseborough), who quickly goes from trimming Billie’s bangs to tagging along on the pro-tennis circuit as Billie’s unofficial plus-one.

For Bobby (Steve Carell), an aging, once-lauded former top player on the men’s circuit, it’s his gambling addiction and his crumbling marriage to his second wife, wealthy heiress Priscilla Wheelan (Elisabeth Shue). A caricature of his former self, Bobby relies on wacky antics and combative behavior to keep himself in the headlines, eventually ponying up $100K to any female tennis player who can beat him.

And thus, the duo’s epic on-court battle was born.

Filmmakers Jonathan Dayton and Valerie Faris (Little Miss Sunshine) craft a visually satisfying, deftly art-directed glimpse behind the proverbial curtain at the backstory behind one of the most-viewed television events of all time. Blessed with some really beautiful cinematography – kudos to Linus Sandgren for his brilliant consideration of lines and geometry in setting up shots – the film tackles issues such as gender equality, sexual liberation, the sponsorship machine behind most sporting events, and even the perils of “stars” fading from the spotlight.

All the while, we get to see what was at work behind Bobby’s cartoon-like persona, and how the much more reserved Billie worked so hard to keep herself in check. The only problem is the film feels fairly slow and largely uneventful… until we finally get to The Big Match, which unfolds with enough drama and suspense (even though everyone knows the outcome) that some in the audience I saw it with actually applauded with every one of Billie’s points.

And though Battle is essentially Billie’s story, Stone is the weaker of the two actors. Carell disappears into his kinetic, frenetic alter ego, making him equal parts pathetic and sympathetic, but Stone comes off as just… Emma Stone in a wig and glasses. The chemistry between Stone and co-star Riseborough is also nonexistent – there’s no passion, no depth and their relationship therefore falls flat despite its magnitude in Billie’s life. The cast is rounded out by a strong team of supporting players – including Sarah Silverman as women’s-tennis advocate Gladys Heldman, and Alan Cumming as designer Ted Tingling – whose work adds color and flair to the proceedings, literally and figuratively.

In the end, the actual battle in Battle is probably its most interesting 20 minutes. And while the rest is definitely agreeable enough, the film is more congenial than confrontational, with a closing line that (while optimistic and a bit cheesy) reminds us the real battles aren’t really over.