And Justice for All

Isn’t it weird how some films reflect the times in which they were made, and others just become dated? 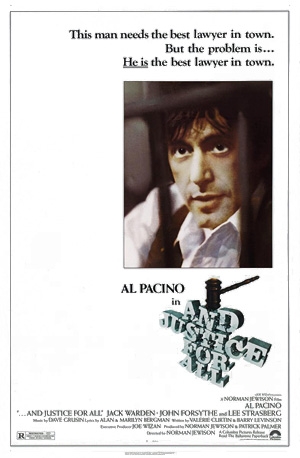 Isn’t it weird how some films reflect the times in which they were made, and others just become dated? And Justice For All suffers from the latter. I had a feeling I needed to watch this movie by myself, and I’m glad I did. The tone is strangely off-key, Jack Warden is utterly out of place, and the score prompts family members to emerge from distant corners of the house to ask, “What are you watching, anyway?” It’s a shame, really, because the film deals with timeless issues and has a number of memorable scenes.

Al Pacino stars as Arthur Kirkland, an idealistic young lawyer who can’t come to terms with the hypocrisy of his profession. As the film opens, we find him in jail for contempt of court. Soon, the same judge who put him there (John Forsythe) is asking Arthur to defend him in a rape case. Arthur is not only the best defense lawyer around, the judges have just enough dirt to blackmail him into doing exactly what they want.

To make matters worse, two of Arthur’s clients are sent to jail on technicalities. Both wind up dead, thanks to the laziness and apathy of Arthur’s colleagues. One lawyer in particular drops the ball, and Arthur is so incensed that he attacks the man’s car with his briefcase, breaking the windshield, and screaming “God damn it!” over and over again. It’s actually quite cathartic just watching this tantrum. Most of us have felt like Arthur, but few have the guts to stand up and say, “This sucks.”

In the meantime, Arthur’s friend and colleague, Jay (Jeffrey Tambor), is dealing with the opposite situation. He succeeds in freeing a client who turns out to be a murderer. Jay has something of a breakdown this point, and winds up hurling China plates down a hallway in the courthouse. Everyone but Arthur thinks he’s out of his mind.

On the bright side, Arthur has a cute girlfriend (Christine Lahti), but she’s on a committee that’s investigating him, so he may be sleeping with the enemy. His grandfather (Lee Strasberg) serves as the only element of stability in his unhappy life. Sadly, dementia is robbing him of his faculties, and he can’t seem to grasp that Arthur has become a lawyer. His confusion is just one of many signs that Arthur is not in the right line of work. By the time he announces that Arthur is in the Coast Guard, Arthur has lost all hope of being an effective lawyer. His sense of justice is simply too keen.

The film builds to a fantastic conclusion as Arthur faces down the prosecution (Craig T. Nelson), and systematically dismantles their case. John Forsythe smirks at the glory of it all, until Arthur announces that the prosecution isn’t going to bring down this respected judge for rape, “Because I am!!” He describes the judge’s guilt in detail, at the top of his lungs, oblivious to the fact that he is out of order. It’s Pacino at his best, and the scene gives you that good-movie-buzz that leaves you wanting to punch the air and shout “yes!”—