Dolly Parton’s Coat of Many Colors

Not only are the Partons more beaten down than your average family, they are also WAY more amazing. 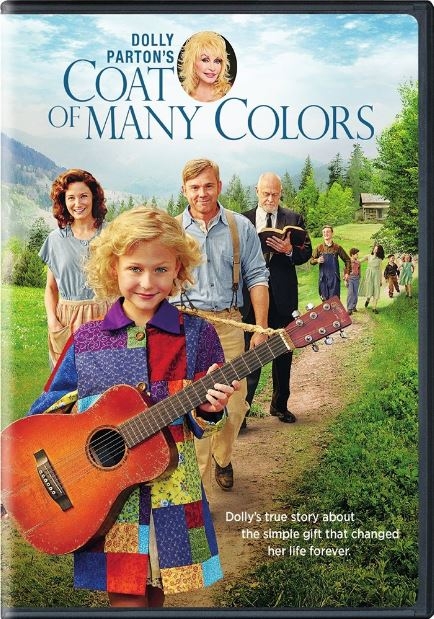 As you may know from Dolly Parton’s famous song and children’s book, Coat of Many Colors is the story of Dolly as a young girl and the multicolored coat her mom made for her out of assorted fabric scraps. The family saw it in the same light as Joseph’s Amazing Technicolor Dreamcoat, but the kids at school saw it as a crappy heap of rags. The story of the coat then becomes a vessel to explore the issues affecting the Parton family at this particular time in their lives.

The made for TV movie quickly establishes Dolly (Alyvia Alyn Lind) as a spirited little spitfire who tells everyone she’s going to be a star. Her spunk is not always received well in rural Tennessee, but young Dolly remains undaunted. “It’s not bragging if it’s true,” she retorts, turning on her heel. But underneath this feisty exterior lies a deep sadness. After months of awaiting the arrival of “her baby”, Dolly’s infant brother is stillborn, leaving the entire family in a state of grief. While Dolly’s mother, Avie Lee (Jennifer Nettles), turns to her faith in God, her father, Robert (Rick Schroeder), finds himself questioning his faith. Why would He kill an innocent baby? Why does He allow good people to face hardship year after year?

This division in faith is made all the more glaring by the fact that Dolly’s maternal grandfather, Jake (Gerald McRaney), is a preacher who never really took to the man who married his fifteen year old daughter. After Jake points out that it’s practically vulgar that Avie Lee is perpetually pregnant, Robert begins sleeping in the barn. Temptation simply has to be avoided since she’ll get pregnant “if we wash our clothes together”. (I don’t think that’s how it happens.) As if this weren’t enough drama, the Partons’ crop of tobacco is infested with horn worms and the past growing seasons have been so dry and unforgiving that Robert sees little point in planting.

This, obviously, is a lot. You’ve got a bunch of sad kids running around, a mother who can barely dress herself, and a father who has adopted a permanently bad attitude. The process of sewing Dolly’s coat of many colors gives Avie Lee purpose and slowly brings her back to life, but when Dolly wears it to school, she’s torn down by bullies. The film quickly becomes sanctimonious. Not only are the Partons more beaten down than your average family, they are also WAY more amazing.

After Dolly befriends a sad little ragamuffin who is even poorer than she is, she and her mother also work out that the bullies are mean because they get no love. So the Partons invite them to dinner. Robert goes to church and comes back inside the house. And Dolly becomes a big star. Wah wah.

Though sweet in theory, the film takes on too much and handles nothing very well. The characters aren’t especially likable, and by the time they reach out to the mean kids with friendship, it feels like they’re doing it to be superior rather than to create resolution. We get it, you’re a super awesome family, even though your baby died and your crops didn’t grow and people were mean to you (major eyeroll). There’s a fine line between feeling uplifted by a movie and being told to feel uplifted.

DVD Extras include deleted scenes and a making-of featurette.