The last animated film to be personally put into production by Walt Disney himself, The Aristocats is a curious, wobbly, and mostly enjoyable film that is not quite up to par with other Disney animated classics. Still, it is for the most part not boring. I mean, when you see a Siamese cat with big buck teeth, huge slanted eyes, playing jazz piano with a pair of chopsticks, you can’t help but perk up and go, “What the…???” 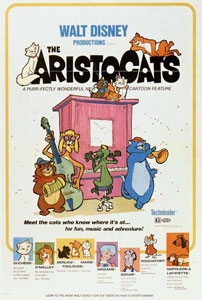 A pretty white kitty named Duchess (seductively voiced by Eva Gabor) lives with her kittens in the mansion of her elderly Madame. I mean, I guess Madame is elderly, because she is actually kind of hot, with her curves and good posture. But because she has white hair and is organizing her will, well she must be this close to death. She wants the kitties to inherit her fortune, which they would then enjoy until their demise… THEN the money will go to her trusty butler Edgar (Roddy Maude-Roxby). Edgar is none to pleased to hear this (when he accidentally eavesdrops). In fact, he figures if he gets the kitties out of the way now, why then the money would go straight to him as soon as Madame abruptly keels over from robust health. So Edgar devises a plan…

Just when you think Edgar is actually poisoning Duchess and her kittens (that would be a sorry and sudden end to a movie that was only just beginning), the basketful of them thankfully wake up abandoned in the French countryside. So the adventure begins! With the help of a rascally tomcat named Thomas O’Malley (Phil Harris), Duchess and the kittens make their way back to Paris and their beloved Madame. Edgar would never do anything to harm the kitties, now would he? But Roquefort the mouse (Sterling Holloway) and Frou-Frou the horse (Nancy Kulp) know that he is behind the whole fiasco.

As in all Disney cartoons, there is lots of breaking into song, the critters are ridiculously adorable (the kitten-mannerisms just about killed me) and there are huge gaps of logic in the Animal Kingdom. For instance: Duchess has three kittens, but there is never any explanation of where they came from. In fact, when Thomas O’Malley unsurprisingly turns into a love interest, he is then put in the place of a surrogate parent, and it is implied, in as many words, that they will get married (weird!). I find things like instant kittens to be much stranger than, say, two hound dogs driving a motorcycle, or a bunch of alley cats bringing a ramshackle Parisian house down with a jazz number.

Mostly The Aristocats moves along at a good enough pace, though I had no problem watching half of the film one night, and picking up the rest a couple nights later. I found strange pleasure in immediately noticing that O’Malley was voiced by the same actor as Baloo the Bear in The Jungle Book, and had a strange shudder of recognition when I heard Winnie-the-Pooh’s voice come from Roquefort the mouse. But still, with it’s weird racial overtones (this was, after all, 1970, not 1940) and its forgettable musical numbers, The Aristocats doesn’t end up ranking among Disney’s best.

There are several games and extras on the Special Edition DVD, including some nifty extras that adults might get a kick out of (an excerpt from “The Great Cat Family” hosted by Walt Disney himself, that aired in 1956, plus a featurette about The Sherman Brothers “The Aristocats of Disney Songs”). Among some of treats for the kittens, the cover of the case trumpets the Virtual Kitten Game, which lets the viewer select one out of a basket of kittens, then is instructed that they have to click icons to pet their kitten, feed them, play with them, water them, and let them sleep, among other things. If you select “correctly”, the kitten responds, and you get a point. I couldn’t see how you could really make a bad choice, and once your points got to 10, your kitten would step forward on the screen, purring and rubbing his face on you. Too bad they didn’t have points for scooping kitty litter, for a bit of realism.