As if turning 21 wasn’t life-altering enough, what if you found out you were a reincarnated god? 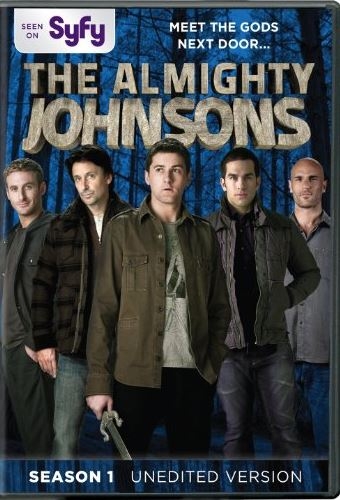 For your 21st birthday, if your three older brothers and your cousin took you out into the woods, told you to strip, stand in a circle of rocks, and hold a sword to the sky for your initiation, well, you’d probably be looking around for a hidden camera just like confused Axl (Emmett Skilton). But one lightning bolt later, the truth is revealed. Not only are he and his brothers gods, but he is the god Odin, reincarnated.

The fun conceit of The Almighty Johnsons is that way back in the day, with the advent of monotheism, the Norse gods decided to get out of town and go as far from Scandinavia as possible, so ended up in New Zealand (why not?). Over the centuries, these gods have been reincarnated as regular folks, who happen to have unusual powers (the ability to never lose a game, which is handy for gambling; the power of persuasion, handy for getting laid; the ability to make things around you cold, which is not good for getting laid; etc.). As “cousin” Olaf (who Axl is surprised to learn is not only their 90-something grandpa, but also an Oracle) explains, these modern, earth-bound gods have only partial powers. If Odin/Axl can hook up with his pre-destined goddess mate Frigg, they will all regain their full powers, becoming their true god selves again. The problem is finding Frigg.

The cast is all game in this popcorn-flick of a fantasy TV show. I have always gotten a kick out of shows that play with mythology, from Xena: Warrior Princess to Lost Girl. As the brothers look for Frigg and come across other gods and goddesses among them in modern-day New Zealand, its fun to see what sort of lives gods like Thor or Loki may have if they happen to reside in a suburban house in the next town over. Because the gods are only partially powerful, the show gets away with not needing many special effects. This works to its benefit, so when you see Ty (Jared Turner) accidentally turn his girlfriend into a popsicle, or Axl stumbling across his new strength, it gives you a tantalizing tease into why these guys might want to see what it is like to function at 100%.

Standouts in the cast include smarmy/sexy brother Anders (Dean O’Gorman) who is constantly outrunning his sleazy past while flirting with the next woman, and Keisha Castle-Hughes, nicely grown-up, as Axl’s crushing roommate, who is devastated when Axl’s starts his whoring ways right after his birthday (one has to find Frigg, see?). But my favorite is Ben Barrington as the oracle grandpa Olaf. Yep, he is probably the hottest grandpa on TV, which his shaved head, eternally young surfer’s body, and his booming voice that waxes poetic in his best prophesizing way, even though he may not always be entirely correct. He is a hoot, the show is fun, and I’m curious to see more.