In a refreshing TV drama scenario, a small town deals with the after effects of a nuclear attack.
By Lindaon October 27, 2016
0 Comments
Our Rating 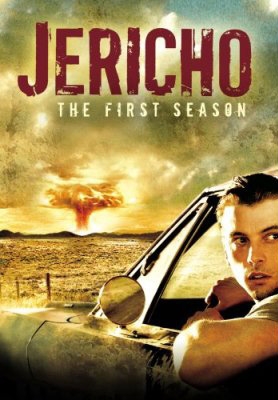 As a child of the 1980s, I grew up having nightmares about nuclear war. Our junior high school was traumatized when we all were encouraged to watch the television movie event The Day After, which showed how people in an all-American town like Lawrence, Kansas would die slowly from terrible suffering in the event of a direct nuclear strike. So, interestingly, a couple decades after the end of the Cold War, the television series Jericho comes out of nowhere, providing a dramatic alternative to all the cop/lawyer/doctor shows that clog primetime TV.

At a glance, it may seem like a throwback plot to what was a very real fear of dying in nuclear war in the 80s, but Jericho has the added twist of the country having since actually experienced an attack first-hand. It may not have been a mushroom cloud, but post-9/11 paranoia and terrorism fears are all over this intriguing television series.

The first episode sets up the series. Jake (Skeet Ulrich), a 30-something drifter, returns to his hometown of Jericho, Kansas after dropping off the face of the earth for 5 years. He has returned to makes amends, and hopefully get some of his inheritance from grandpa, before setting out again to start his life anew. He doesn’t get far from town, however, when a mushroom cloud appears on the horizon. Everyone in town sees it, promptly freaking out. Which direction is the cloud? Was Denver hit? Who did it? All communication with the outside world: TV, internet, phones—it is truly a worst-case scenario.

The series plays out as the characters slowly get tidbits of information, and quickly realize how things will be very very different from now on. Getting the flu can be a death sentence without medication. The grocery store will be quickly empty without shipments of new products. A harvest can quickly go bad, especially from infestation. If the power grid is down, that effects everything from communication to gas pumps to refrigeration. And, heck, what about that dark rain cloud coming directly from Ground Zero of the blast?

Everyone who knows me knows that I don’t watch TV… I just watch TV on DVD. But Jericho is just the type of serial drama that I could get easily hooked on. The show is well-acted, with enough of a variety of characters to keep storylines unpredictable, and the scenario is simply unlike any other on TV right now. One rainy day I ended up watching four episodes in a row because, well, I had to see what happened next. I don’t think this show will rank on my all-time favorite list, but I will say that it is the most original show I’ve seen on primetime in years. To all the fans that sent in thousands of peanuts to CBS to keep the network from cancelling the show (it worked!)… a big thanks! Hopefully the success (no matter how small) of shows like Jericho will encourage the bigwigs at the networks to take a chance on more original programming.

Jericho: The First Season includes multiple episode commentary tracks by folks like actors Skeet Ulrich and Lennie James, as well as writer Carol Barbee and director Jon Turteltaub. There are deleted scenes for some of the episodes, as well as the behind-the-scenes featurette “Building Jericho”, and a piece entitled “What If?” which takes a look at the evolution of the nuclear arms race since World War II, and what would actually happen if an attack would occur.