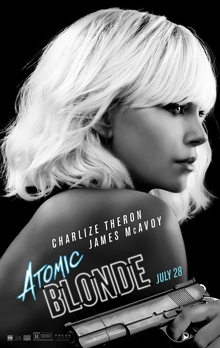 Atomic Blonde is one of those graphic novel adaptations that celebrates it source with its over-the-top eye-popping look. It’s 1989, and MI-6 agent Lorraine Broughton (Charlize Theron) has returned from a mission to Berlin, beaten and bruised with a trail of carnage that needs to be explained to her boss (Toby Jones) and an interested CIA operative (John Goodman). So where does she start? How about flashing back with the thump thump thump thump of some New Order on the soundtrack, a pair of spiked red heels, and a catwalk ready outfit?

With one agent dead (killed by a KGB thug), Broughton’s mission is to find one David Percival (James McAvoy), an MI-6 agent who has gone a bit “feral” in the intoxicating environment of the imminent collapse of the Iron Curtain. At the same time, there is word of a list created by the Soviets of all of the foreign operatives scurrying secretly through Berlin like rats in a sewer. If anyone gets their hands on this list, it could spell doom for all the major players on both sides of the wall: MI-6, the CIA, the Stasi, the KGB. Everyone wants to get their hands on it.

But plot? Who needs plot? While muddling your sweet head with the spy vs. spy entanglements, which is honestly a bit baffling and confusing, Atomic Blonde knows that it already has your shallow attention because of its inherent hotness. The music (David Bowie, Depche Mode, Peter Schilling, Marilyn Manson covering Ministry) is hot. The clothes are hot. The action scenes are, if not hot (that doesn’t seem quite right), they are notably amazing (there is a relentless, single-cut hand-to-hand fight scene on a stairwell that was buzzed about before the movie was even released). And Charlize… Charlize… Well, you know what I’m going to say. Did I mention that she makes out with a French operative named Delphine (Sofia Boutella)? Yes: HOT.

Atomic Blonde plays like a great 80s mix tape thumping in a club that you are not cool enough to go to. But that’s OK. We at least get to watch.

Unsurprisingly, the extras delve deep into the action, especially the anatomy of that most memorable fight scene on the stairs. Charlize did all her own stunts and fights, and in a cool twist, it was one of the fight choreographers who did the camerawork on that scene. Surprisingly, there is less interest in the sexy style, music, and art direction of the film, other than, “Berlin was really cool in 1989!” Too bad, because Atomic Blonde looks awesome (and the fights do, too). Among the extras and short featurettes, there are also extended/deleted scenes, and a commentary by Director David Leitch and Editor Elísabet Ronaldsdóttir.