Bloated, decadent, excessive, and exhausting, this portrayal of the Golden Age of Hollywood before the advent of talkies is a LOT.
By Lindaon December 24, 2022
0 Comments
Our Rating 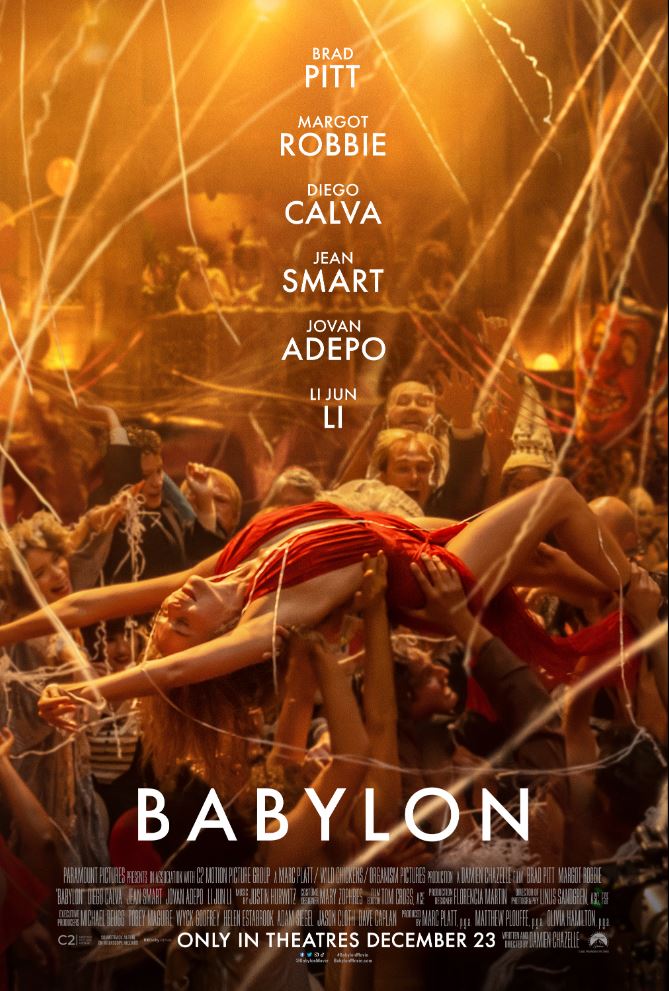 The party, featuring literal buckets of blow, naked little people caressing giant paper mache penises, and a Fatty-Arbuckle-type getting pissed on by a soon-to-overdose starlet, turns out to be a great way to get a foot in the door. Manny bonds with a kindred opportunistic partygoer that calls herself Nelly LaRoy (Margot Robbie), and the next day, both Manny and Nelly find themselves on set at a huge studio swords-and-sandals production out in the dustbowl of the hills. Manny’s busy propping up still-drunk leading man Jack Conrad (Brad Pitt) and frantically running errands, while Nelly finds herself stepping in (and totally stepping up) as a scene-stealing sexy extra. The infectious energy and chaos of this whole sequence is easily the best part of the film. The camera swirls and spins from moment to moment, the energy peaks and ebbs, then explodes in triumph as the perfect closing shot is caught on film just as the sun goes down. It’s fun, fabulous, and exhausting.

The problem is, it’s still the beginning of Babylon. Coming in at 3 hours and 9 minutes, director Damien Chazelle is just getting started. By making a tribute to early Hollywood exploitation and excess, he clearly doesn’t want to leave anything out. The film very carefully goes year by year from the heyday of the mid-1920s silent era, to the advent of talkies, to the inevitable, quickly changing demands of audiences by the mid-1930s as silent films fall by the wayside. If Babylon sounds like a thinly-veiled, sex-and-drugs version of Singin’ in the Rain, you’re absolutely right–it never pretends to be otherwise. Some in the industry flourish during the transition from silents to talkies (Manny works his way up to producer) while others fall by the wayside. As industry dirt is very carefully documented by gossip columnist Elinor St. John (Jean Smart), Jack Conroy learns in no uncertain terms that his time is up. Additionally, Nelly’s excessive party-girl ways, not to mention her bracing Jersey-Girl accent, eventually make her untouchable as well, no matter how many times her old friend Manny tries to prop her up.

To give Chazelle some credit, Babylon makes an attempt at showing the diversity in early Hollywood. In addition to Margot Robbie’s “bad girl” starlet and Brad Pitt’s matinee idol Jack Conrad, there are a couple skimpy side stories of a Black trumpet player named Sidney Palmer (Jovan Adepo), who finds himself a screen sensation with the advent of sound, and Chinese-American cabaret singer Lady Fay Zhu (Li Jun Li), a thinly fictionalized version of early Hollywood star Anna-May Wong, who ends up having to go to Europe to find roles. But we never really learn much about Sidney or Lady Fay beyond their often humiliating treatment by the studios.

In fact, we are given little to care about with any of the characters as they hurtle through a decade or so of change. Manny, despite his soulful eyes, is a bit of a blank, reactive slate. Nelly’s downward spiral is tough to watch, but is strangely uninvolving. The only characters that bring a little bit of heart and spark to the screen are Pitt’s Jack Conrad and Li’s Lady Fay. Their final moment together, where they run into each other in a lobby, just long enough to reminisce about the good ol’ days, makes you want to see their story. There’s a warmth and weariness between the two that would have made a much more interesting friendship to explore.

It’s not giving anything away, really, that Babylon ends with a cliched “magic of the movies” montage as one of the characters sneaks into a movie theater decades later. As the character weeps while watching the silver screen, Chazelle treats us to a really long montage of clips from (supposed) classic films. But probably because the limitations and licensing rights of Babylon‘s own studio, the selections are weirdly random. One of the last “classic” movie moments is a scene from Avatar, of all things, which seems kind of fitting. Both Babylon and Avatar are bloated passion-project films by proven directors with ideas so big that no one dares reign them in. In that sense, whether you are talking about the dawn of the industry or the modern era, it shows that the Hollywood system is alive and well. 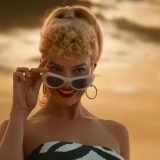 PreviousNew ‘Barbie’ trailer is here to teaseNextThe Banshees of Inisherin 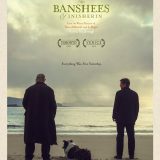