So strong was my visceral reaction to the true-life horror as portrayed in Deepwater Horizon, that it took half an hour for my shoulders to relax after the credits spooled.
By Lindaon May 4, 2017
0 Comments
Our Rating 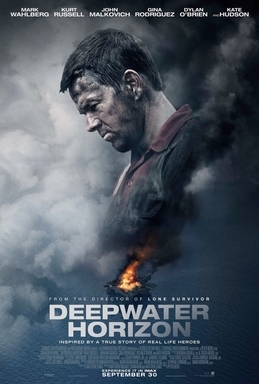 I don’t know about you, but I enjoy a good disaster movie. I love to see landmarks explode, tidal waves roar through cities, and the earth swallow cars. Deepwater Horizon is indeed a disaster movie. It has all the criteria of a classic popcorn flick, where an everyday guy become heroic as the world goes all to hell around him. But knowing that Deepwater Horizon is based on a real event that happened less than half a dozen years ago, where 11 people lost their lives in a fiery, end-of-the-world scenario on a BP oil rig off the coast of Louisiana, makes it sobering to watch. Suddenly this disaster flick become real-life horror.

Appealing everyman Mark Wahlberg leads the ensemble cast, starring as Mike Williams, an electrical technician that has just arrived at the oil rig Deepwater Horizon for a 3-week work stint. The first part of the film is a fascinating, fly on the wall introduction to the industry. We see how the workers are flown way out by helicopter (over 30 miles from the coast) to this remote, monstrous “ship” that has a very specific purpose. The screenplay doesn’t dumb down the everyday workings of this unusual workplace, an aspect of the film I really liked. There is a lot of tech talk, with a very high level overview of the rig’s role in oil drilling, to the “testing the PSI” of the pipes that snake from the rig all the way down into the ocean’s floor, where BP hopes to find a mother lode of oil once the rig caps off and moves on. Mix the tech mumbo jumbo with the equally jargony talk of the corporate visitors (led by smarmy John Malkovich), and you kind of feel like you are shadowing your dad Mark Wahlberg on a take-your-kid-to-work day.

By the time all hell breaks loose, and you know it will, you’ve gotten a bit of an idea of all the pieces of this perfect storm that ended up literally exploding into one of the worst man-made environmental disasters of modern times. Let’s just say, BP does not come off well. The second half of the film involves lots of flames, lots of explosions, lots of flying bodies. You watch, cringing from the carnage, and wince when you practically feel the heat from the billowing fireballs. My shoulders were jammed up to my ears, and it took me a long time to relax after the film ended.

Deepwater Horizon is succinct in a way that some people won’t like. Yes, BP is the villain, but in the context of this film, they are the bad guys because hardworking men died on their watch, just for the sake of corporate profit. What the film does not address is the far-reaching, mind-boggling-in-scope disaster that was a direct result of the Deepwater Horizon explosion: the oil spill itself. But that is another movie. At the end of the film, we see photos of the real-life victims. This film is covering their story, and their story alone. And it does it quite well.