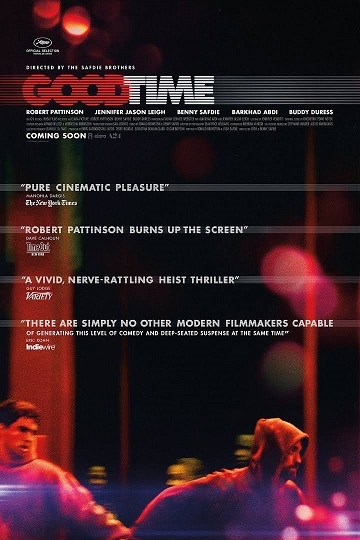 In Good Time, you rarely see Robert Pattinson’s fangy smile to remind us of his vampiric teen idol years. As Connie, he is twitchy, shaggy, and completely devoted to his brother Nick (Benny Safdie) who has been arrested as a result of their botched bank robbery. Connie is sharp as a tack, and Nick less so. In the uncomfortable opening scene, we see Nick in a session with a psychiatrist who is asking questions that are over the young man’s head. Nick’s face is blank, until his confusion is betrayed by a single tear going down his cheek. Connie is furious that the psychiatrist has made him cry. In fact Connie is kind of furious in general. It is not really clear why the brothers feel the need to rob a bank, but you guess it is so they can be simply left alone.

The botched heist lands Nick in jail, and from there Good Time careens like a car without a driver. Connie’s sole purpose is to try to spring Nick from jail, either legally or not so much. His trajectory over a wild, violent night has him crossing paths with teenage girl, a security guard, and a none-too-bright criminal, among others, in situations that somehow become so increasingly ludicrous that you can only laugh in disbelief. He makes a bunch of really bad decisions, but at heart seems like a good guy.

When the film was over, I exclaimed that I had absolutely no idea where the plot was headed the whole time, and I felt it could have easily gone on for another couple hours at that exhausting pace. The cinematography is gritty and sometimes strangely beautiful (like the brothers covered with red exploding ink from the bank bag, running down the street under red neon lights). There is an 80s quality to the film from its synthy soundtrack to the initial vagueness of time period. It looks like it was made on a shoestring, but is also effortlessly cool because of that. With its relentless pace, frenetic quality, and cringe-inducing violence, Good Time is frankly exhausting… but it is always entertaining, even when you think you can’t take anymore.