With the earnestness of a biblical epic, and the production values of a Hollywood action film, this latest remake of Ben-Hur could have been a lot worse.
By Lindaon December 9, 2016
0 Comments
Our Rating 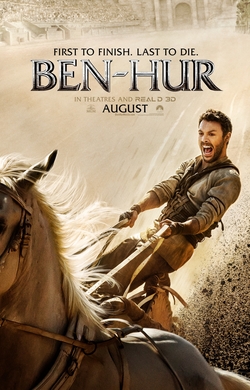 Now, everyone will compare this film to the multiple-Oscar-winning 1957 epic Ben-Hur starring the majestic Charlton Heston (and his supporting cast of very white teeth). The truth is, this story has been told several times, starting in the silent era, so making a new version is as valid as, say, making another Tarzan movie. After all, director Timur Bekmambetov is the one who revisited Abraham Lincoln as a vampire hunter a few years ago.

In this interpretation, handsome Jewish prince Judah Ben-Hur (Jack Huston) is living the life of the 1% in Jerusalem with his family. Despite lots of horse-riding together and manly hugs, his brooding adoptive brother Messala (Toby Kebbell), who prays with little goddess statues, feels he will never fit in because he doesn’t have the family name. So he grabs his already-packed bag and leaves for Rome to find himself.

Fast forward a few years, and Roman-occupied Jerusalem is tense. Pontius Pilate is coming for a visit, and who is his right-hand soldier but Messala. Judah is not a rabble-rouser, but he has a soft spot for the ant-Roman zealots, and takes the blame when one of them shoots at Pilate right in front of his house. Ooops. Judah’s family are taken away, and Judah is sent to a galley ship for five years.

Now, I have to say, there is a naval battle scene from the perspective of the slaves shacked beneath the deck, who row the giant oars while holes are being shot in the sides of their ship. This scene, I have to say, was pretty damn cool. Judah can get peeks of the action through the blown out sides of his ship, which is really not the way you want to be looking outside. This scene was very well done and visually exciting.

But to quicken the rest of the story, Judah washes up and meets a travelling band of chariot racers. Hooking up with them, he is convinced the best way for revenge against Messala, who is now one of the top guys in Roman-Jerusalem, is a good old fashioned chariot race in the circus. Cue exciting finale.

Now, there are several giggle-worthy moments in Ben-Hur. At one point early on, Judah is chatting with someone on the street, and this guy with a neck beard (Rodrigo Santoro), who happens to be casually shaving wood with a wood planer on the side of the road, starts spouting unsolicited advice like “Love your enemies.” (Gosh, who could the friendly hippie be?). At one point, I swear that when Judah and his wife Esther were horseback riding, that she was wearing skinny white jeans (jury is still out on that one). Then, most distracting, woefully-miscast Morgan Freeman shows up as the leader of the travelling band of racers, and, with his dreadlocks and American accent (in a film filled with default Euro-British), I just kept thinking he looked like Whoopi Goldberg.

Even at a simplified 2-hour runtime (vs Heston’s 3-1/2 hour version), the Ben-Hur sometimes feels like it is dragging. But I do have to admit that the scenes from the galley, and of course the chariot race were pretty exciting. The look of Jerusalem and the racing circus was visually impressive (and had me googling what these places really looked like). And when the film naturally manages to get the crucifixion of Christ into the climax, I found myself quite moved. For all those that complain that this film butchers a true Oscar-winning classic, they will certainly have a point. But for the audience that hasn’t seen the original, or simply doesn’t care, this 2016 version is not as bad as it could have been.