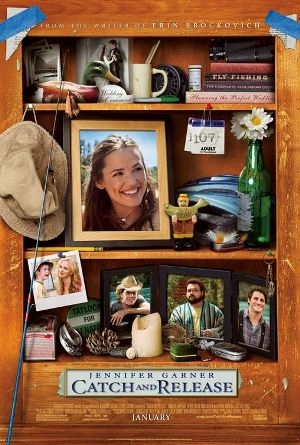 That’s what I thought as I left the screening of Jennifer Garner’s painfully tepid and somewhat incoherent dramedy that, I think, is about finding yourself through the loss of another. But, to be perfectly honest, I’m not sure if that truly is the movie’s point because I spent much of the film trying to decipher its message and,  perhaps more tragically, its basic storyline.

Garner, in a decent but by no means exceptional turn, stars as Gray Wheeler, a brand-new widow, whose saint-like fiancé (who’s never seen or heard, just talked about wistfully in the past tense and shown in dreamy, fog-drenched silhouette flashbacks) died just before their impending nuptials. His funeral kicks off the film, and then we’re treated to a mish-mash of random, interconnected vignettes and tangents involving Gray; her late-beloved’s two best friends, portly Sam (Kevin Smith, overly huggable) and earnest Dennis (Sam Jaeger, overly noble), who vacillate between what seem like simultaneous crushes on Gray and generic brotherly affection; a scruffy, screw-up of a guy named Fritz (Timothy Olyphant, overly underexplained), who apparently has a history with Gray and her deceased dude; and trashy but endearing single mother Maureen (Juliette Lewis), whose little boy (Joshua Friesca) may or may not have been fathered by…you guessed it.

For reasons known only to writer-director Susannah Grant, Fritz unceremoniously arrives on the scene, banging a waitress (played, note the Moviepie trivia, by Sonia Bennett, who previously starred in the much-maligned-by-me topless-boxing movie Punch) in Gray’s bathroom shortly after the eulogy, and then just…stays. He’s apparently a big-shot movie-industry guy in Los Angeles but, like an amiable and aimless drifter, he inexplicably plops himself down in Denver with Gray and the gang and slowly ingratiates himself into every facet of their lives. (Why they never give him the old heave-ho right at the outset is a mystery, especially since he seems so repellent to everyone.) He’s (semi-)clearly the Earthy, Irreverent Hero Who’s Going to Show Gray What It Means to Live and Love as a Flawed Human Being, but it feels like it takes forever for this to be remotely obvious to all involved.

Sam, meanwhile, is depressed and, rather suddenly, suicidal. (Whaaa…?) Dennis, from the get-go, pines for the newly available Gray, but struggles with overstepping his bounds as her non-threatening-but-totally-adorable guy friend. And Maureen – with her new age-y talk of auras and massages, and her scatterbrained-but-good-hearted ramblings –  shows up on Gray’s doorstep like a poor man’s Phoebe Buffet.

The plot, such as it is, just kind of meanders from moment to moment without a purpose. The gang has dinner, Gray confronts her would-be mother-in-law (Fiona Shaw) over ownership of her engagement ring, the gang goes fishing and Fritz suddenly develops a keen interest in photography, and so on. Throughout, I kept getting the feeling that the movie had been destroyed by its editing process, and that big pieces of the puzzle had been edited out so that the resulting mess had simply been stuck together in what the filmmakers hoped would be a linear fashion. But, really, no.

I kept wondering whom the movie is meant to be about. Gray? Okay, then why spend SO much time focusing on everybody else? Wait, is it actually about everybody else? Okay, then why are the characters so poorly realized that Fritz’s name isn’t even uttered aloud until 90 minutes into the film?? Seriously, I looked at my watch when someone finally said his name, because I couldn’t believe he’d gone that long as a totally anonymous character. Similarly, the fact that Sam works at Celestial Seasonings is hinted at repeatedly, but finally revealed very late in the film…which is too bad, because that nugget of information would have made some of his earlier asides much funnier.

Is the movie about death? Not really. Life? Sort of. Finding love? I guess. Friendship? Maybe. Maybe not. The list of potential plot purposes just goes on and on, and all are addressed to some degree at some point in the film, but rather than making a blanket statement about any single theme, the movie becomes a patchwork quilt that doesn’t quite make you feel as warm or cozy as you’d hope it would.

Ultimately, and in what is perhaps a strange irony, Catch & Release — just like death – left me with more questions than answers, and feeling cheated by the whole thing.