I kind of wanted to punch this movie when I finished watching it.
By Vickieon July 12, 2016
0 Comments
Our Rating 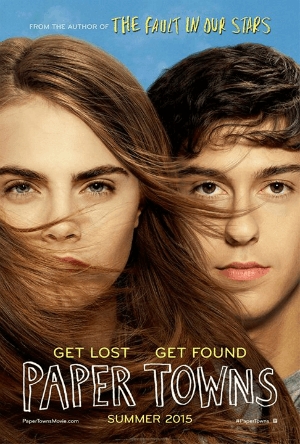 Based on the novel by teen-lit author-god John Green, who also penned the weeper The Fault in Our Stars, this coming-of-age drama starts of well enough, but then quickly devolves into a tedious, uninteresting and, ultimately, irritating exercise that left me feeling duped. It is not the swoony romance its marketing would have you believe it is.

And maybe that’s the point. Having not read the novel, I wasn’t prepared for the story or its outcome, and it’s obvious the theme of illusion vs. reality is a paramount one in the lives of its characters. Still. (Did people who read the book want to punch the book when they read it, I wonder?)

Nat Wolff stars as Quentin – affectionately known as “Q” to his pals – a teenager who’s spent most of his life nursing a massive crush on his free-spirited neighbor Margo (Cara Delevigne). Best buds as children, the duo grew apart as they grew older, and sit at opposite ends of the high-school-clique spectrum (Q’s geeky, Margo runs with the popular crowd). All that changes one fateful night when Margo enlists the aid of her former friend in an elaborate revenge adventure that tests Q’s courage, conviction and comfort zone. It also throws gasoline on his smoldering affection for Margo who… vanishes the following morning!

This sets in motion a search for answers – and marks the point where the film starts to lose steam quickly – as Q and his two best friends, the bookish Radar (Justice Smith) and the chaotic Ben (Austin Abrams), set out on a clue-driven road trip to find Margo, whom Q believes is playing the world’s most epic game of hide-and-seek. [Please note that Radar’s girlfriend (Jaz Sinclair) and Margo’s former bestie (Halston Sage) also tag along on the journey, but both are given so little to do beyond being tag-alongs that they might as well have stayed home.]

While it wants to be a thoughtful alternative to the standard teen-drama flick, Paper Towns fails to deliver the message I think it’s trying to convey – namely, that people aren’t always who we think they are or want them to be. Margo is presented as this dreamy wild child, with a blatant disregard for rules but an uncanny ability to charm people into doing whatever her latest whim demands. So, it’s easy to see why the comparatively nebbish Q would be smitten, and Delivigne and Wolff have great chemistry together. Unfortunately, removing her from the picture, literally and figuratively, instantly sucks the energy right out of the movie, as the remaining characters aren’t nearly as interesting or as richly drawn. Nevermind the fact that the road trip to track Margo down has got to be one of the dullest and least satisfying in cinematic history.

Wolff is wonderful as Q, and model Delivigne proves she’s got some acting chops behind her good looks. Too bad they’re both let down by an unconvincing story that undermines their characters and leaves the audience (or, at least, me) wishing the whole thing had gone so very very differently.