As a comic-book movie: Ghost Rider gets NO pie! (Despite the site default to “1.”) As the best bad movie to come out in a long while: full pie! Thus, I had to pen a letter to the one person I knew would appreciate its profound awfulness most… 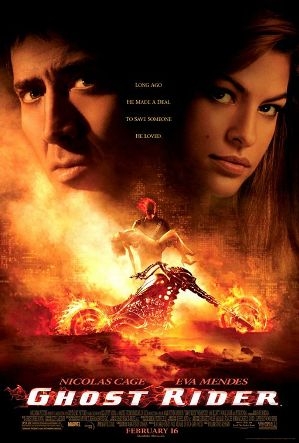 My dear friend, my sweet boy, drop whatever you’re doing. Turn off ANTM, put away the green slop and get thee to the nearest theater playing Ghost Rider because  you must, YOU ABSOLUTELY MUST, behold its gloriously loathsome splendor for yourself. In person. Immediately.

As I sat in the theater, letting its orgasmically terrible shiteousness wash over me like Donald Trump’s week-old bathwater, I kept thinking, “Sweet mother of all that is holy, Eric is going to LOVE how truly awful this movie is!” Honestly, it makes Stealth look understated and moving. It makes Catwoman seem like a touching character study. And it will make you howl with the kind of laughter you haven’t experienced since the Basic Instinct sequel. Yes, it’s that deliciously bad.

Nicolas Cage, in full-on, ridiculous-to-the-extreme Elvis schtick and crowned with the world’s worst toupee (seriously, it makes Tom Hanks’ DaVinci Code mop look stylish), stars as Johnny Blaze, a stunt-motorcycle rider who made a deal with a cheese-tastic Mephistopheles (Peter Fonda…no, seriously, Peter-freakin’-Fonda!) as a teen and who’s now being forced to do the devil’s bidding as an adult. Seems Satan’s got his hooves full with a quartet of misbehaving netherworld malcontents, who think they’re all that and a bag of Hellfire and who have plans for world domination. Their leader? Wes Bentley! That’s right, much to the amazement of the audience, Wes is still a working actor and didn’t vanish off the face of the cinematic Earth when his 15 minutes of American Beauty fame evaporated along with any hint of name recognition.

So Wes, clad like a leftover from Underworld and behaving as though his career depends on the volume of scenery he can chew in a single film, is all over-the-top as Blackheart, who’s got his evil eyes on the prize – an ancient scroll that would raise demons to life or bring about an apocalypse or return Star Jones to a daily TV-hosting gig or something (I didn’t pay close attention, but it really doesn’t matter, does it?). His henchdemons are a trio of nasty elemental imps whose names I didn’t catch but whom I’ll describe thusly: one guy’s made of wind (neat!), one guy’s made of dirt (cool!) and one guy’s made entirely of KY Jelly (OMG, ewww). And the Meph-by-Ghost-Rider-proxy vs. Blackheart conflict literally becomes a thigh-slapping, riotous battle for the lesser of two evils!

Eric, I can’t even begin to describe how horribly awry this movie must have gone from its original concept. Not since Cuba Gooding Jr. signed on for Boat Trip has an Oscar winner so tarnished his trophy with such a train-wreck of a film. I even started to wonder if the filmmakers were making it awful on purpose. I mean, they couldn’t really, honestly and truly and with nobility in their comic-loving hearts, be serious… could they?

Elvis… I mean, Nicolas… races full-throttle into his part which, tragically for him, means the kind of absurd overacting that makes audience members feel physically embarrassed for the person onscreen. The first time Johnny “transforms” into Ghost Rider, the entire row behind me, who had been twittering and snickering throughout, erupted in laughter at what can only be described as one of cinema’s most ridiculously unconvincing metamorphoses, wherein half-hearted wailing and grotesque facial expressions are meant to indicate the fires of Hell literally rising up from within. Someone needs to YouTube that clip so the global mockery can commence.

Peter Fonda is lame, Wes Bentley is lamer and I don’t know what Eva Mendes did to piss off the filmmakers, but they practically draw and quarter her as an actress. Her character, Johnny’s childhood-sweetheart-cum-grown-up-paramour Roxanne, is easily the World’s Dumbest Reporter and serves virtually no purpose in the story save for the requisite T&A. With cleavage bursting forth from her blouse as though it might explode at any moment, and with more painfully cringe-worthy dialogue than a Tyra Banks Panel Lecture, Roxanne is nothing more than a vapid, useless appendage for our already-laden-with-crap hero. She and Cage have zero chemistry and one wonders what either character sees in the other. Worse for Mendes, Roxanne is actually referred to as “ugly” – to her face! – by a waiter! Ouch. I don’t know how much she made co-starring in this supreme dud, but she needs to go ask someone somewhere for hazard pay and punitive damages for what will no doubt be emotional distress as reviews trickle out.

Oh, Eric, it’s times like these that I wish we lived in the same city, because I know there are precious few out there who will enjoy this film on the kind of level I feel confident you will. I saw the movie solo, but I had an empty seat next to me – one of many in the theater – that I would have gleefully offered to you had you been nearby.

Instead, please take my heartfelt recommendation and treasure it in your heart. See Ghost Rider and think of me. Laughing. Hard.