A slew of colorful characters, a centuries-old feud between vampires, and a stellar turn by John C. Reilly all combine to make this big-screen adaptation of the Darren Shan novels an unexpectedly entertaining and engaging – if very busy – ride.
By Pie Pal Vickieon October 12, 2013
0 Comments
Our Rating 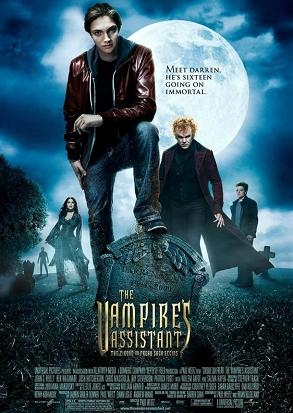 Directed by Paul Weitz (In Good Company), the story revolves around teenager Darren Shan (Chris Massoglia), whose strait-laced, hum-drum life is turned inside out when a freak show rolls into town and he’s befriended by its headliner, vampire Larten Crepsley (Reilly). Before long, Darren becomes a newly minted half-vampire and finds himself smack dab in the middle of a war. On one side is Crepsley and the legions of more “humane” vampires of the world (who don’t kill their victims); on the other, the more lethal “vampanese” (who do kill the people on whom they feed), led by the rotund, nefarious Mr. Tiny (Michael Cerveris). More alarmingly for Darren, Mr. Tiny has also enlisted Darren’s mischievous and freshly vengeful ex-best friend, Steve (Josh Hutcherson), as part of his bloodsucking army, pitting young friend against young friend.

All this action is set amid the bizarre, unusual and circus-like world of the freak show’s members. Among them are the towering Mr. Tall (Ken Watanabe), bearded-lady Madame Truska (Salma Hayek), Evra the Snake Boy (Patrick Fugit) and Rebecca (Jessica Carlson), a girl with a monkey tail and a hold on Darren’s heart. A number of other supporting characters – played by the likes of Jane Krakowski, Orlando Jones and Frankie Faison – also circle the proceedings but are limited to little more than cameos in this already jam-packed film.

And perhaps it’s that abundance of riches that may turn some viewers off. Given that the source material is the first three books in a 12-novel series, there’s a whole lot of information thrown out in only an hour and 48 minutes, but that’s to be expected in a mythology-establishing first film in, say, a trilogy (think X-Men or Spider-Man). Leaving the theater after the screening, I said to my movie-going pal, “This would have made for an awesome six-hour miniseries.”  There was that much happening and, a few times, it became confusing or rushed as a result. The fight sequences – and there are several – are also so hyper-edited that it’s often impossible to discern what’s happening until the dust has settled and you can see who’s been left standing. Most frustrating: many of the freak show’s freakier talent is only glimpsed, and there’s so much rich territory to mine that it seems as though the filmmakers only scratch the surface.

But that which is scratched is pretty cool and very much in the same vein as TV’s Buffy the Vampire Slayer in tone and character… which is to say, it’s irreverent and funny, with as much myth and lore as modern-day re-imagining.

In terms of the actors, Massoglia – who reminded me of a young Ashton Kutcher – isn’t the most compelling lead ever to walk across a movie screen, but his somewhat-bland performance is balanced by Reilly’s wonderful, enchanting and larger-than-life presence. His Crepsley is wry and clever, sad and vulnerable, fierce and courageous. It’s a John C. Reilly that we, as an audience, haven’t really seen before, and it was refreshing to behold.

I suppose the biggest testament to … Assistant’s effect on me is the fact that, as it wound to a cliffhanger-y close that leaves it screaming out for a sequel, all I could think was, “I wanna know what happens next!”

And, when it comes to potential franchise films, that’s a pretty good sign.