More than just a movie about a guy stuck in a crevice, 127 Hours proves itself a powerful meditation on the human condition.
By Vickieon February 8, 2014
0 Comments
Our Rating 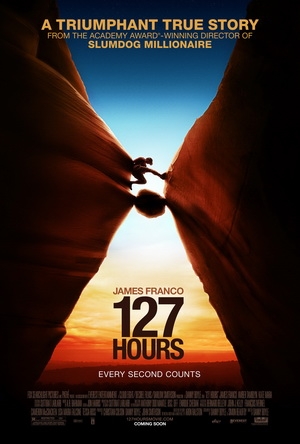 The one-man-against-the-odds drama revolves entirely around James Franco’s terrific solo performance as Aron Ralston, the skilled but somewhat reckless rock climber whose self-preservation instincts ultimately saved his life when a 2003 climbing accident left his arm pinned under a boulder. Trapped by himself in the middle of nowhere and wedged in a crack carved through stone, Ralston – whose story became worldwide news – is forced to keep his wits about him and improvise survival strategies in order to eventually free himself. Much easier said than done, it turns out.

Despite the film’s singular location and mostly static lead character, director Danny Boyle (Slumdog Millionaire) nonetheless manages to infuse the story with movement and kinetic energy. Crowded, busy, frenetic urban montages bookend 127 Hours, and even daredevil Ralston is shown in perpetual motion (zipping around his apartment, in his car, on a bike, climbing rocks, swimming) up until the precise moment his accident forces him to come to a dead stop.

After that, the focus of the film goes from the external to the internal. It’s no longer about sweeping vistas or impressive stunts, it’s about everything going on in Ralston’s mind. His thoughts and fears and even his plans are relayed to the audience via confessionals he videotapes on the camcorder he’s brought along. Hallucinations provide comfort or confusion, depending on the day. And one vision, in particular, reminds him that he cannot give up.

Like Cast Away, the movie trains its lens on the unexpected resourcefulness that can emerge when you’re stranded alone, and the deep-rooted awareness of the bigger picture of life that can come shining down in your darkest hours. Having hope proves just as valuable as having determination.

Franco is wonderful as Ralston, and he completely disappears into the character. The whole film feels real, and credit for that goes to its lead actor as well as its skilled director. Boyle delivers some genuinely hold-your-breath-tense moments throughout, and the resulting tone is, at times, perfectly claustrophobic. Especially strong is both men’s handling of The Scene – the one most people are waiting to see, and the one that gives Ralston his physical freedom. It’s not nearly as gory or graphic as you might expect but, instead, conveys the horror of what has to be done with sound and editing and, yes, a bunch of fake blood.

Streamlined and tight and never dull, 127 Hours delivers a pretty riveting 90-or-so minutes, even if you already know how it ends before it begins.