I really wanted to love this movie. In the end, I found it just kind of meh and, I think, it might have benefitted from a stronger actress at the helm.
By Vickieon July 12, 2016
0 Comments
Our Rating 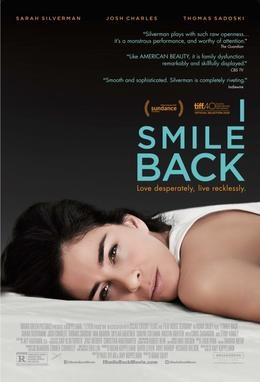 Sarah Silverman makes her dramatic-lead debut – and does a decent but not outstanding job – in this paint-by-numbers story of a wife and mother trying to hide her drug and alcohol addiction from her family. Unfortunately, Silverman never really seems connected to the character or the material, and much of her character’s behavior in the film rings hollow/false for me. Anyway…

Laney Brooks (Silverman) has a loving husband (Josh Charles), two great kids (Skyler Gaertner, Shayne Coleman) and what appears to be an idyllic life as a well-off suburban wife and mom. But a not-so-secret penchant for booze, pills and cocaine mean she’s also walking a fine line between successfully masking her demons and… well, total self-destruction.

What unspools (aside from Laney’s life) is a series of vignettes of Laney making poor choices and doing bad things – sleeping with her best friend’s husband (Thomas Sadoski), hooking up with random dudes at bars and getting high in between school drop-offs and pick-ups.

Problem is, as mentioned, there’s a lack of gravitas to the proceedings. (Laney’s what-should-be-powerful exchange with a therapist (Terry Kinney) tasked with her rehab is particularly weak and flat, and yanked me right out of the movie.) In Silverman’s hands, Laney seems bored and annoyed more than she does deeply troubled or desperate, and the film plays out a bit like a made-for-TV movie. Unlike comedic-actress Jennifer Aniston in the not-at-all-funny Cake, comedic-actress Silverman skims the surface of her character’s addiction rather than delving headlong into the darkness. As a result, there’s a lack of believability and credibility to her performance – and, by default, to the film itself.

There are also more than a few plausibility issues that arise over the course of the story, including one especially inexplicable sequence in which Laney is discovered by her husband, sprawled out and strung out on the bathroom floor in one scene… and then suddenly driving down the street in her SUV a second later. How did she get in the car? Why would her husband let her drive if he knew she was high? Once again, stuff that made me sit back and go, “Come on…” as I watched.

It’s obvious that everyone’s heart was in the right place when making I Smile Back, but good intentions do not necessarily great films make. This one was just okay.