You know, if director Neill Blomkamp had turned Chappie into a family film, it may have hung together much more tightly (and effectively), and I might have enjoyed it more. As it stands, it’s instead a somewhat incoherent sci-fi mish-mash that surrounds its meek, misguided, metal hero in chaos and violence.
By Pie Pal Vickieon July 12, 2016
0 Comments
Our Rating 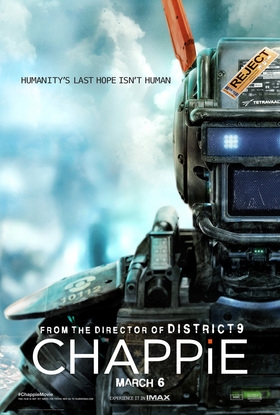 Set in Johannesburg, South Africa, sometime in the near future, the film presents a semi-dystopian society where the police force is largely made up of robots. They’re law-enforcement machines, almost indestructible and capable of doling out swift, emotionless, fearless justice. Voiced by Blomkamp’s frequent collaborator, Sharlto Copley (whose movements were digitally captured to create the titular robot on screen), Chappie is a damaged police droid who’s rescued from the scrap heap and resurrected by inventor Deon (Dev Patel), who’s developed a firmware reset that delivers the experimental gift of sentience.

Problem is, all this happens just as Chappie is stolen (chap-napped?) by a trio of criminals – Ninja, Yo-Landi (rap group Die Antwoord members Ninja and Yo-Landi Visser) and Amerika (Jose Pablo Cantillo) – who’d like to use him for evil rather than good. They want Chappie trained to lie, cheat, steal and kill so he can help them pull off a massive heist; Deon wants Chappie to use his evolving consciousness to, you know, write poems, appreciate art and become as (non-criminally) human as possible.

Meanwhile, increasingly frustrated rival inventor Vincent Moore (Hugh Jackman, sporting a rather unfortunate micro-mullet and a super-jaunty pair of shorts) wants his own hulking creation – nicknamed “the Moose” – to be given equal opportunity by the icy, disinterested head of the robotics corporation (Sigourney Weaver) responsible for the police-droid contract. When she turns him down, he angrily sets his sights on bringing down Deon… and, by extension, Chappie.

It’s all very loud and frenetic, and much of the film involves Chappie getting his ass kicked over and over again. The filmmakers give him a childlike personality (he has to learn and evolve organically), which works to an extent and does manage to create a sympathetic (if synthetic) character… but there are gaping plot holes all over the place that become increasingly hard to ignore. Chappie’s development arc also seems to stall, leaving him perpetually a kid… until, that is, the screenplay requires that he suddenly possess scientific genius. Then he’s instantly super-smart, but still childlike. What?

There’s no one to root for in the film but Chappie, either. None of the human characters are particularly likeable – Deon and Yo-Landi come close, but are nonetheless thinly realized (he’s a tech nerd! she’s a rap-punk who wants to be a mum!). Speaking of thinly realized, both Weaver and Jackman are stuck in cardboard-cutout villain roles we’ve seen many times before in better films.

Which brings me to Chappie’s biggest shortcoming: it feels like a patchwork creation made up of pieces of other similarly themed movies (RoboCop, Short Circuit, I Robot, District 9, for starters), but it hasn’t really been sewn together especially well. There are cutesy bits alongside super-violent bits, a touch of comedy mixed in awkwardly with the drama, and a whole slew of antiheroes who are more villainous than heroic.

Yet despite all of these things, overall, I still enjoyed the movie. Yeah, it’s loud and choppy, but I didn’t hate it as I feared I would. Blomkamp has abandoned his ubiquitous hand-held camerawork (which nauseated me in his previous outings), so that alone is reason to celebrate. The special effects are astonishingly stellar and perfectly seamless – never once do you doubt that Chappie is a real, walking, talking robot, and the decision to anchor his emotional cues in his ears (they go down when he’s sad or scared, perk up when he’s happy or excited) was a great one.