As everyone knows, I *love* a great surf movie. Though heartfelt and ambitious, the surfing drama Chasing Mavericks was more pleasant than amazing. 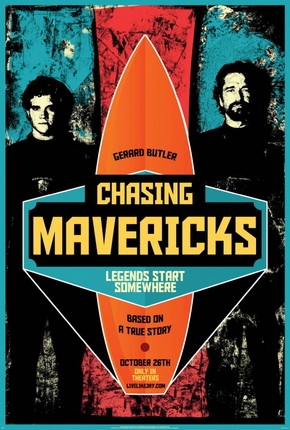 The film tells the true story of teenaged surfer Jay Moriarty (Jonny Weston), whose road to sports-world stardom was paved by chance, hardship and raw talent. Rescued from near drowning as a young boy by surf veteran Frosty Hesson (Gerard Butler), Jay soon becomes Frosty’s pint-sized shadow, eager to learn from the wave-riding expert. By the time he’s a teenager, Jay has honed his skills enough to be a respected surfer on the local Santa Cruz shores, but a covert peek at Frosty battling the breaks at Mavericks – the legendary, and notoriously deadly, California swells – sparks a brand new mission: to ride them, as well.

An initially reluctant Frosty – whose name perfectly reflects his somewhat abrasive personality – eventually agrees to coach Jay, and the two embark on a rigorous 12-week training plan that includes lessons in paddling, holding one’s breath (for four minutes!) and, essentially, how not to die. Along the way, Jay struggles to keep his alcoholic mom (Elisabeth Shue) on the wagon, and falls for his childhood best friend, who’s matured into a stunning young woman (Leven Ramkin).

Directed by Curtis Hanson (with Michael Apted stepping in for the final few weeks of shooting), Chasing Mavericks is at its best when it’s in the water. Anytime the characters are actually catching waves or being pulled under by the powerful surf or just sitting on their boards and waiting, the movie is compelling and engaging and exciting to watch. But, as soon as they’re back on dry land, the story becomes clichéd and formulaic, with some leaden dialogue that feels like it belongs in a made-for-TV movie, and underdog scenarios – like cartoonish local bullies repeatedly belittling Jay – that seem all too familiar.

Weston, all bleached-blonde curls and bright blue eyes, is good, but not the strongest or most interesting actor, so he’s often overshadowed by his more seasoned co-stars. Butler, nicely grizzled and rough, struggles to maintain his American accent but, otherwise, does a solid job as the guy who seems afraid of nothing… except, maybe, intimacy. Shue is unfortunately (and unexpectedly) wooden and unconvincing in her role, but the other two key women in the film are wonderful surprises. Ramkin is ideal as the dreamy tomboy who melts Jay’s heart, and the film’s biggest standout for me was Abigail Spencer as Frosty’s wife, Brenda. Grounded and warm and smart, the character (and the actress) provides much of the film’s heart.

Moriarty’s story isn’t necessarily a happy one, but it’s certainly inspiring and, in that regard, I suppose the film succeeds. But, as a movie about surfing and despite the shots that serve as cinematic bookends, it seems to safely skim the wake more than it dives deep.