Confessions of a Prairie Bitch: How I Survived Nellie Oleson and Learned to Love Being Hated 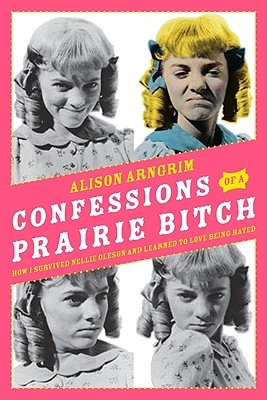 If you grew up watching Little House on the Prairie, you undoubtedly have some pretty vivid memories of Nellie Oleson, played by Alison Arngrim.  Regardless of the fact that her memoir is titled Confessions of a Prairie Bitch, Alison is nothing like her character.  In this case, “bitch” is synonymous with funny, candid, resilient, and strong, and her book makes for a dishy and moving read.

Though Alison was born into an established showbiz family (her mother was the voice of Gumby and Casper the Friendly Ghost, her father was Liberace’s personal manager, and her brother, Stefan, was a child actor), she did not lead a charmed life.  Employment and income could be sporadic, the family moved often, and there was little structure to their life as a family.  Alison and Stefan were often unsupervised, leaving Alison to contend with an older brother who she knew to be unstable, chemically dependent, and frequently violent.  She was six years old when he began sexually molesting her.

Given her situation at home, Alison relished the opportunity to work on Little House on the Prairie.  She found an instant best friend in Melissa Gilbert, and an instant family in the cast and crew.  Through her role as Nellie, she slowly overcame her shyness and found a voice for all of the feelings she couldn’t express in her own life.  Suddenly it was okay to throw tantrums and act upon her worst impulses.  Better yet, she was paid to do it!

Arngrim has a strong sense of what Little House fans want to know from her, and her behind-the-scenes anecdotes do not disappoint.  She even devotes an entire chapter to the fabulous wheelchair episode wherein Nellie pretends to be paralyzed, and Laura outs her by shoving her wheelchair down a hill and into a swamp – probably one of the best episodes of anything ever.  You’ve gotta love the fact that she doesn’t dismiss the very things fans love, and her wry sense of humor keeps the pages turning.  Her description of Mary’s husband Adam (along the lines of “the most ridiculously hot blind man ever born”) made me laugh out loud, as does her gift for pointing out the absurd.  It’s totally possible to genuinely love the show and thoroughly enjoy making fun of it.

For the most part, Arngrim is funny because she tells the truth, and it’s this honesty that makes her book compelling, whether you’re a hardcore fan or just a sympathetic reader.  She also manages to create a satisfying and moving story arc out of the events of her own life – the abuse she suffered as a child inspired her to fight for victims’ rights and tougher laws, her friendship with costar Steve Tracy (who died of AIDS) inspired her AIDS activism, and her role as Nellie inspired the comedy act that has made her a cult sensation.  Most importantly, she illustrates how being Nellie empowered her to be the fabulous bitch that she is.  The end result is a memoir that offers hope to us all.