As Hank Hill said in the cartoon King of the Hill, ‘I’m trying to control an outbreak, and you’re driving the monkey to the airport!’ The monkey in the virus thriller Contagion may very well be Gwyneth Paltrow, and she probably just took a cab. 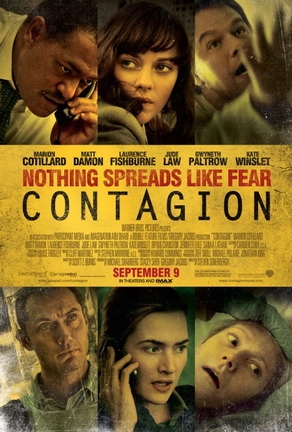 I have to admit Matt Damon is growing on me. He is one of a passel of quality actors filling up the large cast in Contagion, and in my book he has one of the most affecting scenes. It is literally right at the beginning of the film. His wife Beth (Gwyneth Paltrow) has returned to their home in Minneapolis after a business trip in Hong Kong. A slight cough turns to fever turns to a seizure on the kitchen floor within a day of her arriving home. Mitch (Damon) rushes her to the ER, only to be told a brief time later but an abrupt doctor that they couldn’t save her. She’s dead. Mitch listens to him attentively and asks, “Yes, but when can I go talk to her?” Mitch’s complete lack of comprehension (and Damon’s effectiveness in this scene) sets the stage for the chilling premise of Contagion.

Does everyone remember the swine flu a couple years ago and the media hysteria surrounding it? It was a worst case scenario that never happened. However, in that real-life contagion, 18 people out of the 22 in my office came down with it in a single weekend. Most of us were fine on Friday, and then the office was a ghost town on Monday. Now imagine if a sickness that kills 30% of its victims within 48 hours spread like that. That is the scenario of the virus in the film.

Director Steven Soderbergh fills his tale with a collage of characters. Dr. Ellis Cheever (Laurence Fishburne) is the face of the Center for Disease Control in Atlanta, with scientists like Dr. Ally Hextall (Jennifer Ehle) scrambling in the lab for a vaccine, and Dr. Erin Mears (Kate Winslet) out in the field trying to figure out the origins of the disease, and how it is spread. There is a doctor from the World Health Organization (Marion Cotillard) researching the potential origin in Hong Kong along with local authorities. Finally there is a snaggle-toothed blogger (“journalist!” he claims) named Alan Krumwiede who crows as often about his number of unique readers as he does about conspiracy of the government being in bed with drug companies in order to hide the truth about the killer virus and available cures.

With such a stellar cast, Contagion is always watchable. Fishburne, in particular, brings a warm, solemn brevity to what has to be the most stressful job in the world in such a crisis. Winslet and Cotillard, just by showing up, make their brief appearances worthwhile. And the woefully underemployed Ehle gets to shine in a pivotal role. On the other hand, Damon, except for his initial impact, doesn’t get much to do, and Jude Law gets the privilege of bringing the momentum of the story to a screeching halt every time his screeching presence shows up on screen.

Though Contagion suffers a bit in momentum in the second half (it seemed rather tame, when in fact I expected more big-picture carnage regarding the epidemic), the first part is a gripping thriller. As Soderbergh’s camera lingers on a hand touching a bus railing, a slight cough in an elevator, the running of a credit card by a waiter… you become very unnerved about the myriad of ways that a killer virus could be spread in every day life. I wasn’t the only one who snickered nervously when I saw the promotional freebie handed out after the screening: yes, sanitizing spray. Um, could I have another one of those?