Dolphin Tale is a movie I probably would have been obsessed with as a kid (I want a dolphin friend!). As an adult, I have to admit I still kind of fell for it. 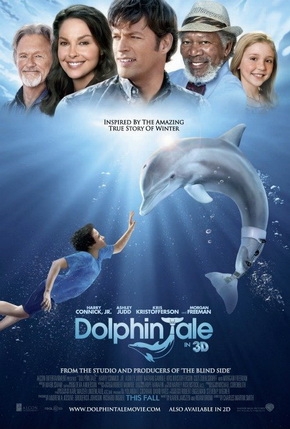 A lonely boy finds an injured dolphin on the beach. She is horribly tangled and bleeding, caught in a rope that holds a crab pot. She has given up, and is waiting for death. An animal rescue agency picks up the injured dolphin, but her injuries are so severe that her condition is hit-or-miss. Her tail is so horribly infected that her tail fins end up getting amputated in order to save her. But how can a dolphin swim without her tail?

As this is based on a true story, you know the dolphin isn’t going to die. Winter, as she is named, has a plucky spirit and, responding to the love of the boy who found her (I know!), she perks up, and comes up with a new way of swimming. But this new way, wagging her tail side to side like a fish rather than up and down like a dolphin, could end up killing her. What to do… what to do… After visiting his disabled vet cousin at the local VA, the boy, Sawyer (Nathan Gamble), enlists the help of a quirky prosthetics doctor (Morgan Freeman) to come up with a solution that could help Winter: Invent a prosthetic tail!

This kind of movie potentially could have been doused and drowned in Velveeta cheese. Surprisingly, it is pretty light on sentimentality. There is no love interest, despite the boy having a hot single mom (Ashley Judd), and the main rescuer doctor being a hot single dad (Harry Connick, Jr.). The prosthetic tail is not successful at first, or even the second time. There is a hurricane that almost destroys the animal refuge in Clearwater, and they are faced with shutting it down. Don’t worry, though. If the ending weren’t happy, I’m sure we wouldn’t have a family movie about Winter (who, I must add, plays herself in the movie!).

The true story of Winter ended up being an inspiration for disabled folks across the world, and especially touched young war veterans that found themselves missing limbs after returning from tours of duty. Dolphin Tale touches on this aspect of the true story with that character of Sawyer’s cousin Kyle, a potential Olympian, who returns from Iraq physically and emotionally broken. Winter’s spirit and ability to adapt proves to be an inspiration for him and others disabled vet. It may sound cloy if it weren’t true—but it is, and it is really a great story worth sharing. On that note, I dare you to not be moved by the closing credit videos of disabled children and adults meeting Winter .

In addition to the usual behind-the-scenes featurette about the film and actors, you can learn more about the real Winter in the featurettes “Winter’s Inspiration” and “At Home With Winter”. There is also an animated short illustrating “The Hutash Rainbow Bridge” (a native story that Harry Connick, Jr. tells in the movie about the origin of dolphins), and “Spotlight on a Scene” telling about the opening sequence in 3D (which I actually thought was the cheesiest part of the movie as it looked fake). There is also an animated short “Ormie and the Cookie Jar”, gag reels, and an extra scene. And don’t forget to check out the real Winter at www.seewinter.com.