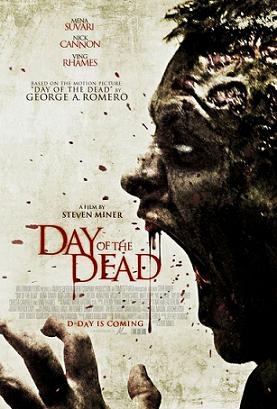 The best thing that this straight-to-video remake of Day of the Dead has going for it is the DVD packaging. The cardboard sleeve has a fabulous old-school holographic image that shows a zombie head vomiting, then not vomiting… vomiting, then not vomiting. Impress your friends by holding up the box (as I did) and say, while tilting the box ever-so-slightly for effect, “Look… look… vomiting zombie! Isn’t this awesome?”

Too bad the contents of the packaging aren’t as interesting. And, correct me if I’m wrong, I don’t think any zombies actually vomited in the film! Hm.

Mena Suvari, Nick Cannon, and Ving Rhames are slumming in this unnecessary “re-imagined” version of the George A. Romero zombie classic of the same name. I suppose with the Asian-horror genre bled dry by American directors recently, they are now turning to remaking the classics. Needless to say, this new version of Day of the Dead doesn’t offer any particularly unique twists to warrant a re-imagining for a new era.

A town in Colorado is quarantined by the military, including Corporal Sarah Bowman (Suvari) who just so happens to be a hometown girl with some unexplained issues with her family. In fact, much is unexplained in this film, as it drops right into the so-called action, opening the film with teenagers (of course) making out in a remote building in the woods. One boy gets a bloody nose, and well… talk about a sense of doom. In fact, the whole local hospital is overwhelmed with sickly sorts, people looking pale, hacking up a lung, getting nosebleeds and such. But when suddenly someone’s eyes glaze over, and their flesh opens in seeping sores, well that is just the beginning of all hell breaking loose.

A rag-tag group of survivors, including Sarah, a couple other military boys (mouthy sidekick Cannon and Stark Sands as an infected soldier with a crush), Sarah’s brother Trevor (Michael Welch) and his spunky girlfriend of sorts (AnnaLynne McCord) find themselves holing up in a radio station, then grabbing the nearest Hummer to make a break for the roadblocks. Zombies lurch about classically, but also have picked up the moving-quick-n-scary technique introduced by Danny Boyle’s 28 Days Later.

But the thing is, it’s not scary enough, gross enough, or even remotely memorable. I almost wanted to ask the zombies, “What’s your motive?” Apparently, the zombification was caused by a man-made virus (of course), and it cause the zombies to attack and eat people. And if you survive a bit, then you turn zombie yourself. But some people are immune supposedly, though that is just thrown out a statement of fact to explain why this group of inter-related folks all seem to be doing OK. Whatever.

There are a lot of extras, including some on-the-set clips of scenes being filmed, some half-assed “interviews” of the major players trying to justify how great of a film it is, some overly long trailers that show the whole movie, and commentary by the director and a handful of folks that bothered to show up. Not much to see here, folks.