All My Loved Ones (Vsichni moji blízcí)

The World War II Kindertransport is obviously a fascinating event, but telling the story with a soft-focus lens sells it short. 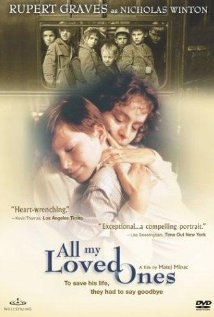 All My Loved Ones is a fictionalized story of one family in Czechoslovakia just before World War II broke out. Hitler has already occupied several countries, and is threatening to go across the borders and into Czechoslovakia. Jewish doctor Jacob Silberstein is a well-to-do citizen with a large and loving family. His three brothers and his parents are all still around, and form a large, nurturing and accepting extended family. His young son is a squeaky-clean, bright-eyed, always smiling innocent who dreams of getting his first pair of long pants. But the threat of Hitler looms on the horizon, and a British man, Nicolas Winton, that Jacob’s brother Sam met on the train wants to do something for the Czech people who have been so kind to him: he organizes the Kindertransport, a way to get the children of the country to safety in England, where families are waiting to take care of them “for the time being”.

The story, however, doesn’t focus on the Kindertransport. Instead we see the Silbersteins’ slowly come to grips with the realization that things are not as good as they seem. They struggle with the decision to let their young son go to England without them, not knowing if the war is about to begin, or if it is a false alarm.

Now this could have been an interesting plot. It is obviously a fascinating story. But the plot is shot with a soft-focus lens, supposedly from the point of view of the young son, even though half the time he isn’t around. I felt a bit guilty for squirming through the Hallmark-ness of the family scenes, but I couldn’t help it. The kids are obnoxiously sweet, and the adults ridiculously sensitive, even the black sheep brother of the family. British actor Rupert Graves makes a brief appearance as Winton, but his story is such a minor subplot that he doesn’t appear until the end.

The closing credits of All My Loved Ones showed a short, maybe two-minute clip, of an original British documentary about the real people involved with the Kindertransport, including an elderly Winton being introduced to a roomful of adults that were the children he had saved. This short clip, ironically, was twice as moving as anything in the film itself.