I had one of those horrible weeks at work where all I wanted to do on Friday night was watch a splatterfest horror movie, and lo and behold, just my luck that it was the opening weekend of the remake of George Romero’s 1978 zombie-horror classic Dawn of the Dead.
By Lindaon April 21, 2013
0 Comments
Our Rating 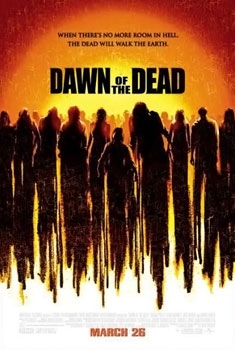 Now, I’m the first to admit that I haven’t seen the older version, but to take a break from our dreaded tasks this week, my co-workers and I had downloaded the trailer from the 1978 version and thought the original, at least, looked pretty darn cool. Of course new films by definition have to have more of everything: more blood, more gore, better exploding heads, and faster zombies (can’t be stood up by 28 Days Later‘s sprinting killers). Dawn of the Dead achieves all of that, but I’m not sure it offered anything new to the genre.

So let’s start out with the opening sequence. Nurse Ana (Sarah Polley) comes home from a long shift at work for Date Night with her husband. The next morning they wake up and the neighbor girl is standing in the shadowy doorway of their bedroom silently. But it appears that her lips have been chewed off! Later I asked myself what I would have done in the same situation. Husband goes “oh!” and rushes to the girl, who of course rips out his jugular vein with her teeth, soon turning him into a zombie as well. Ana barely makes it out of the bathroom window. Lesson: If you see a neighbor kid with their lips chewed off who doesn’t look alarmed about the situation, quickly lock them in a closet and CALL FOR HELP.

As the whole world seems to have turned into zombies overnight, Ana ends up in a shopping mall with the sole survivors, including the usual motley crew: the stud cop (Ving Rhames), the nice guy (Jake Weber), the ex-thug-turned-good-guy (Mekhi Phifer) with his pregnant woman, the loose-cannon mall security guard (Michael Kelly), and a passel of others. (In a seemingly unconscious nod to Evil Dead, there is a guy who is the spitting image of Bruce Campbell as the snarky sarcastic wimp of the group. Did Bruce say no to the role? I could only wonder.)

Anyways, the folks are trapped into the mall, and are also trapped with themselves, as some of them got a little bite beforehand and figure out they will eventually turn into zombies themselves. It turns into a race against… time? I’m not really sure. They just figure that after awhile they all need to bust out of the mall with fortified mall shuttle vans and escape to hopefully somewhere else.

Maybe it is because there is a lack of hope to the whole thing. There is never any clue as to what will beat the zombies. There is never any clue to what started the whole epidemic in the first place (the flesh ripping starts almost immediately, and even goes through the closing credits… stick around). You just end up watching this desperate group of people anxiously waiting around staring at each other, and occasionally blowing off the heads of zombie-trespassers.

Dawn of the Dead isn’t a bad film. It continues with the trend of taking-itself-seriously horror films, which is good. It even has some very cleverly-used songs in the soundtrack (“The Man Comes Around” by Johnny Cash? Huh!). It did gross me out several times, but it didn’t really scare the crap out of me. Overall, the new Dawn of the Dead is solid, but not a classic.