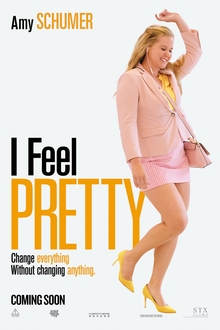 The basic conceit behind I Feel Pretty will hit a trigger point with most modern women who pay any attention to the media. If your face and body doesn’t look like the image of beauty (as presented to us in movies, music videos, magazine, etc.), then there must be, by default, flawed. Anyone who has tried on optimistic jeans, no matter how self-confident, can relate.

Renee (Amy Schumer) is a 30-something working woman who has crippling self-esteem when it comes to her looks. It probably doesn’t help that she works for a cosmetics empire, but relegated to the tech department in a basement iif you believe you are awesome and hot, you can BE awesome and hot.n Chinatown. One day, she hits her head in spinning class (well, after landing on her vagina… ouch!). When she comes to, she looks in the mirror and sees the gorgeous woman that she has always wanted to be. The joke for everyone around her is that she looks exactly the same.

With her new self-confidence, Renee suddenly is able to change her life. She gets a job as the receptionist (“the face!”) of the cosmetics company run by Avery LeClaire (Michelle Williams, surprising me in a deft comic turn). Her fearlessness terrifies a sweet dorky guy (Rory Scovel) to date her. And she pretty much dazzles people around, because she finds herself dazzling. Basically,

The premise is funny and relate able, even at Renee hits her own wall of judginess, ostracizing her own “normal” (but comfortable in their own skin) gal pals played by the game, if underused Busy Philipps and Aidy Bryant. You know that at some moment, her magic veil of confidence will disappear—but the question is: Will she learn her lesson? (Try to guess!)

This isn’t groundbreaking comedy, and may not provoke heavy guffaws. Nonetheless, there are lots of good laughs in the film, and it is a heck of a lot better than Schumer’s last stink-bomb outing Snatched. Schumer’s is a very funny physical comedian, and though by “normal” standards she is a very attractive woman, we are reminded that by Hollywood standards, she is considered, well, “normal” (aka, not a supermodel). Seeing Spanx on Amy Schumer is a lot more relatable than seeing Spanx on, say, Sandra Bullock. This “everywoman” appeal of Schumer makes I Feel Pretty work. This movie isn’t going to save the world, but it should make those of us (most of us?) who have had issues with self-esteem, get some laughs.