With a charming, quasi-1980s-teen-movie sensibility and a trio of likeable leads, this underdog misadventure makes for a refreshing smaller-scale summer-movie entry.
By Vickieon July 12, 2016
0 Comments
Our Rating 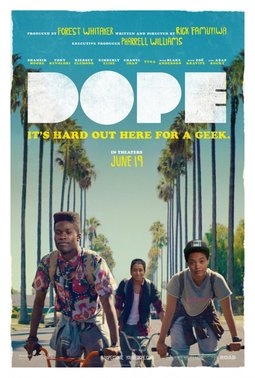 Virtual unknown Shameik Moore (who’s had a handful of guest-starring spots on TV shows) makes his big-screen leading-role debut as Malcolm, a super-smart, straight-A inner-city-L.A. high schooler with dreams of attending Harvard. He and his best pals, Jib (The Grand Budapest Hotel’s Tony Revolori) and Diggy (Kiersey Clemons), are ‘90s hip-hop aficionados, who dress in ‘90s style, lurrrrrve ‘90s music and play together in a punk trio when not fleeing teenaged bullies. They lead relatively ordinary lives… until the night they decide to attend a massive birthday bash for one of the local drug dealers (A$AP Rocky).

Soon, there’s a shootout, a knapsack full of drugs slung over a panicked Malcolm’s shoulder, a whole bunch of angry dudes who want said drugs, a crucial interview with a Harvard alum, and a comely dropout (Zoë Kravitz) on whom Malcolm has a major crush and who, in many ways, sort of sits at the center of all the mayhem.

Lively and fun, Dope delivers a briskly paced, never-boring story filled with goofy, colorful characters (Blake Anderson’s enterprising stoner being a standout). With each passing scene, the absurdity level gets cranked up a notch, but it never feels so outrageous as to be over-the-top. Malcolm and his friends get into unbelievable situations that somehow still feel believable, and they’re all so fantastically good-hearted that you can’t help but want them to overcome the ridiculous obstacles fate throws in their path.

Moore makes for a winning lead – equal parts nerdy and noble – and both Revolori and Clemons hold their own as his devoted, willing-to-go-along-with-it friends. Together, they’re not unlike another memorable teen trio that endured a series of crazy events (Ferris, Cameron and Sloane, anyone?).

In a field of big-budget, high-profile releases, Dope is a lighthearted little alternative that proves a good story and good actors are all you need for a good time at the movies.