There are two types of Steven Spielberg historical films. There are the ones with sharp edges, like Munich and Saving Private Ryan, that are often more jarring and, in my mind, more memorable. Then there are the ones with the rounded edges, with the sharp points smoothed out to make the history lesson more palatable for general audiences, like Lincoln and now Bridge of Spies.
By Lindaon July 12, 2016
0 Comments
Our Rating 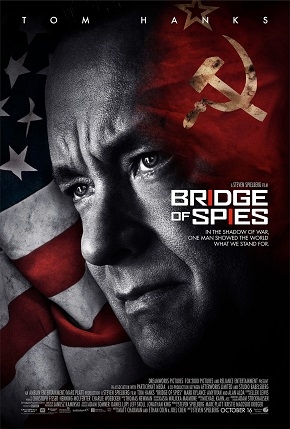 That is not to say that Spielberg doesn’t know how to make an entertaining historical film. Bridge of Spies, after an exceptionally sluggish first half hour or so, is indeed entertaining.

Set in the Cold War, the always-appealing Every Man Tom Hanks plays James Donovan, an insurance attorney that ends up defending the most hated man in America: Rudolf Abel (Mark Rylance). Abel, a seemingly shlubbly middle-aged man has been arrested and accused of being a Soviet spy. For all practical purposes, it sure as heck looks like he is guilty, and the jury finds him to be so. But in the trial process, Donovan found Abel to be a good soldier, and a reasonable man, spy or not. In the Cold War, such a prisoner would be better alive than dead… because what if the Soviets have an American spy in custody?

The film picks up when such an opportunity arises. A top-secret American U2 spy plane is shot down over the Soviet Union, and the pilot is captured. Because the mission is top secret, the pilot is also top secret–meaning he officially doesn’t exist. So, with curious logic, the U.S. Government picks Donovan to “unofficially” be the liason between the United States and the Soviet Union, as the two sides barter a trade for two prisoners who kind of can’t even really be acknowledged by their own countries.

The best part of the film is the second half. Donovan is a bit out of his league, crossing the newly-built Berlin Wall into East Berlin to negotiate terms at the Soviet Embassy… unofficially of course. Pulled into negotiations is also East Germany, a country that desperately wants to be shown wearing its big-boy pants on the international stage, while still being under the thumb of the USSR. When a GDR-captured American student is thrown into the discussions, its fascinating to see Donovan plays all the players against each other, while still making everyone seemingly save face. I have to admit, this part is pretty cool.

Bridge of Spies comes across as a little bit of “history lesson lite”. Other than Hanks and Rylance, most of the actors and their characters are pretty generic and not particularly memorable. It is the plot mechanics that keep the story going. The fact that this is based on a true story makes me think that there is a whole lot there that got left out or condensed. But to Spielberg’s credit, he pulls us into this fascinating story, and makes you want to know more by the time the credits roll.