The Secret Life of Pets

“It was cute.” That’s been my response to anyone who’s asked what I thought of the latest offering from Illumination Entertainment, which follows assorted animals on a series of misadventures in the big city. Because that’s what the animated comedy was: cute. Not nearly as rich or deep in content or story as a Pixar film, not especially great or terrible, but nicely light, fluffy and undeniably cute.
By Vickieon December 9, 2016
0 Comments
Our Rating 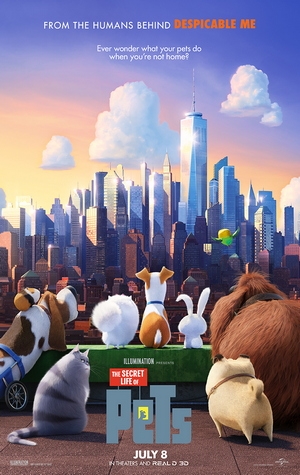 Comedian Louis C.K. voices Max, a plucky terrier who lurrrrrrrves his life with his doting owner Katie (voiced by Ellie Kemper). But when Katie brings home a new “brother” for Max – an oafish mutt named Duke (voiced by Eric Stonestreet) – something of a canine power struggle begins to emerge… until both dogs are forced to work together after winding up on the streets of New York collar-less, lost and pursued by animal control.

While Max and Duke try to find their way home, duelling menageries try to track them down – on one side is an enormous gaggle of abandoned pets, who live in the sewers and are led by a ridiculously cute but totally vengeful bunny named Snowball (voiced by Kevin Hart); on the other are Max and Duke’s well-meaning but not especially effective domesticated pals, led by an equally squee-worthy pampered puffball named Gidget (voiced by Jenny Slate), who’s determined to bring the boys back safely.

Plenty of chase sequences and elaborate set pieces fill this brisk and breezy film, but the story itself feels a little thin. The filmmakers introduce a couple of very interesting potential storylines/messages – what happens to pets when their owners just discard them? how do pets feel when their owners die? – but those are either abandoned, not fleshed out or are left open- ended… almost as though someone somewhere said, “Wait, that’ll be too sad for audiences. Can we drop it?”

The voice cast (which also includes Lake Bell as an apathetic cat, Steve Coogan as the world’s creepiest feline, and Albert Brooks as a hawk trying to curb his natural instincts) is strong and the characters, as mentioned, are pretty cute across the board. Hart’s Snowball – who’s equal parts vigilante and victim – and Dana Carvey’s geriatric, partially paralyzed Basset hound are both delightful, well-balanced standouts.

The Secret Life of Pets may not be the smartest or most inventive animated film in recent memory, but it’s harmless, suitable-for- all-ages summer fun that delivers genuine laughs and plenty for pet lovers to enjoy.