Beyond fear, the most emotional involvement I felt was wanting to push the kid aside so I could have Baloo and Bagheera as my personal friends in my own movie.
By Lindaon December 9, 2016
0 Comments
Our Rating 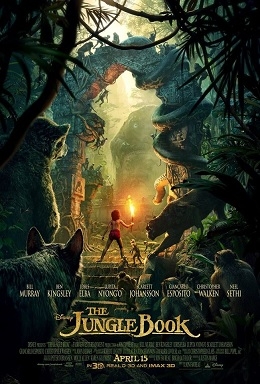 Anyone who has read my reviews knows that I don’t mind me a talking animal movie. Heck, I don’t even mind if said chatty creatures are Golden Retriever puppies with names like B-Dawg that speak in a hip-hop lingo. And as CGI gets better and better, I know that a whole movie can easily be carried by realistically-animated and acted creatures if done right.

Well, I can say that the “live action” remake of The Jungle Book had me as far as the critters. For the movie itself though, I found it vaguely terrifying, not to mention burdened by an iffy child actor. (I felt kind of bad for young Neel Sethi who did have a tough job acting against a green screen for pretty much an entire movie.)

Mowgli (Sethi) is a young “man cub” raised in the jungle by beasts. He runs with a pack of wolves, and has a father figure of a black panther named Bagheera (Ben Kingsley). As the boy is getting older and more clever with human “tricks” (you know, having thumbs and making tools), his animal protectors are realizing that the jungle may not be the best place for him. Plus, the truly frightening tiger Shere Khan (Idris Elba) does NOT like the idea of a man-child living in their territory, as he was nearly blinded by Mowgli’s human father (whom he promptly killed). Shere Khan sees Mowgli as his deserved next supper.

The story is the adventure of this young man-cub being shunned from his pack in their attempt to return him to humankind. On his journey, he meets the friendly, lazy bear Baloo (rather fabulously voiced by Bill Murray), the seductively creepy giant python Kaa (Johansson), and the huge Mafia-Don of an orangutan named King Louie (the pretty great Christopher Walken). Meanwhile, Mowgli is literally being stalked by Shere Khan like a baby antelope. Many action scenes ensue, some involving truly scary fights (think growling, tooth and claw) between giant cats, huge apes, and other menacing beasts.

There is an earnestness in the film to apparently stick close to Rudyard Kipling’s source material (which I haven’t read) while doggedly making sure to not disappoint fans of the 1967 animated Disney film. So you end up with a mish-mash of wild adventure, terrifying fights among beasts, and two songs (“The Bare Necessities” and “I Wanna Be Like You”) awkwardly thrown into the middle of rather serious action, just to appease the fans. (There is also a third song, sung by Scarlett Johansson’s snake Kaa, “Trust in Me”, which is relegated to the closing credits.)

Beyond fear, the most emotional involvement I felt was wanting to push the kid aside so I could have Baloo and Bagheera as my personal friends in my own movie. The Jungle Book is truly, inarguably visually impressive. But it kind of felt like a series of scenes thrown together, where at one point even Mowgli kind of forgets that he was supposed to be on his way somewhere. Though I will remember the mocking monkey, the film felt like lots of style and little substance — I left without even a song stuck in my head at the end.