The best things about this movie are a snail and a slug, who provide much of the film’s laughs and liveliness. Otherwise, Epic is a pleasant, but not exceptional, animated adventure.
By Vickieon May 22, 2013
0 Comments
Our Rating 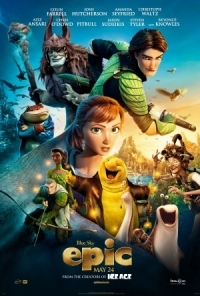 The story centers on teenager M.K. (voiced by Amanda Seyfried), who – after the death of her mother – goes to live with her estranged, eccentric-scientist father (voiced by Jason Sudeikis) in a ramshackle house in the middle of the woods. He’s obsessed with proving the existence of an advanced society of teeny, tiny beings living in the forest; M.K. just wants a “normal” dad. When a chance encounter with the diminutive Queen Tara of the Forest (voiced, somewhat poorly, by Beyoncé Knowles) results in M.K. being shrunken to pint-sized proportions, she promptly becomes embroiled in a battle between good and evil.

On one side, the “leaf men” – including rebellious young Nod (voiced by Josh Hutcherson) and hulking commander Ronin (voiced by Colin Farrell); on the other, inexplicably nefarious Mandrake (voiced by Christoph Waltz) who, for reasons known only to him and the screenwriters, wants to turn the entire forest into a pile of rot.

While it wants desperately to be a crowd-pleasing, cheer-for-the-good-guys animated adventure, Epic is, instead, a sort of sloppy mish-mash of better films. Movies like this should have a clear, concise plot, but Epic can’t seem to decide what it wants to be. A father/daughter story? A teen romance? A battle epic? A cautionary environmental tale? All of those are explored, but none really ever feel fully realized. The screenplay, based on William Joyce’s book The Leaf Men and the Brave Good Bugs, is credited to five writers (including Joyce), and seems to suffer from a problematic case of “too many cooks.”

There’s all sorts of forest mythology that swirls around the proceedings, but it rings a little hollow and meaningless. The life of the forest depends on the survival of a magical bulb? The Queen needs to pick the bulb, which has to stay moist? If the bulb sprouts in darkness it becomes evil? What? Why? What? I started not to care after a while.

The animation is strong, but not without cracks in its armor: the character of Ronin seems to move and speak unlike any other character, and is almost robotic (not in a good, suits-the-character way) in nature. There’s a disconnect between realism and cartoon, as well – some of the creatures (e.g., the birds) and settings (i.e., the forest) have been created to look as realistic as possible, while others (basically, everyone and everything else) are exaggerated and cartoon-y. The film’s visuals are often spectacular, though, and the backdrop for all the action is a rich palette of colors.

Speaking of exaggerated and cartoon-y, though, I absolutely LOVED Mub (voiced by Aziz Ansari) and Grub (voiced by Chris O’Dowd). Mub is a smart-assy, doughy slug who thinks he’s irresistible to the ladies; Grub is an oafy, good-hearted snail who wants desperately to be recruited by the leaf men. Together, they are the comedic sidekicks who steal every scene they’re in. The ongoing adventures of this plucky pair would make for a much more enjoyable big-screen outing, I think. M.K. and Nod, on the other hand, are a surprisingly dull duo who, despite being animated (or, perhaps, because of it), lack any kind of onscreen chemistry.

I think the filmmakers might have set audiences up for disappointment by calling their film “Epic” (which, btw, is a title without resonance in terms of the film’s content). It immediately conjures notions of awesomeness and unforgettable filmmaking but, instead, delivers a decidedly average experience.

Learn about the real critters that inspired the film’s characters in “Birds, Bugs and Slugs”, decay in the forest in “Rot Rocks”, and the sneaky buggers that have the gift of camouflage in “Bugs of Camouflage”. “Mysteries of Moonhaven Revealed” is a multi-part look behind the scene of the making of the film, including interviews with director Chris Wedge and the animators. Learn about what life would be like if you were really really tiny in “The Epic Life at 2 Inches”. Finally, there is a theatrical trailer and an enhanced feature of a coloring book. 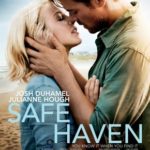 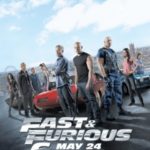