YOU GUYS, THIS IS THE KIND OF MOVIE THAT NEEDS TO BE REVIEWED IN ALL CAPS.
By Vickieon July 12, 2016
0 Comments
Our Rating 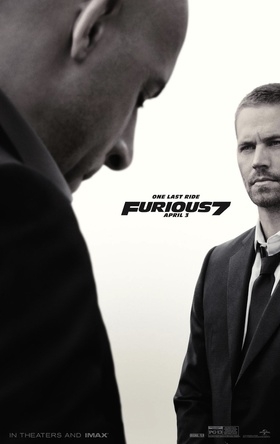 To spare your eyes, I won’t actually do that (much). But, man, when it comes to bang for your action-film-loving, movie-going buck, the payoff doesn’t get much bigger than with this seventh installment of the increasingly outrageous street-racing franchise.

How can I put this into context? Okay, you know that scene in the very first film, The Fast and the Furious, where we, as the otherwise-unaware-of-how-street-racing-works audience, first caught a glimpse what nitrous oxide can do? And how slack-jawed we all were? That’s kind of what it’s like to take in Furious 7, because the entire movie is ALL about that same kind of shock and awe. But, since we’re all kind of over nitrous by now, the filmmakers opt for huge, explosive, mind-blowing set pieces instead.

In case you care about story, the one in Furious 7 is fairly straightforward: seriously pissed-off renegade British-Forces soldier Deckard Shaw (Jason Statham) hops across the pond and sets out to eviscerate Dom (Vin Diesel), Brian (Paul Walker) and our entire crew of antiheroes (including series regulars Michelle Rodriguez, Tyrese Gibson and Ludaris) because they’re responsible for destroying the empire (and body) of his little bro, Fast & Furious 6 villain Owen Shaw (Luke Evans).

To add an extra degree of difficulty to the proceedings, the fellas are simultaneously tasked with protecting a computer hacker (Nathalie Emmanuel), who’s created much-sought-after software – called “God’s Eye” – that essentially grants its user unrestricted access to every cell phone, camera and mobile device on the planet. Not surprisingly, every super-villain around, including Djimon Hounsou’s Jakande, wants to get their hands on the girl and her creation.

What unfolds is what I can only describe as the MOST RIDICULOUSLY OVER-THE-TOP SERIES OF CAR CHASES, RACES AND STUNTS IN RECENT MEMORY. The filmmakers have taken what audiences have come to love and expect from the F&F movies and JACKED IT ALL UP LIKE CRAZY. Imagine your favorite car-related sequence from any of the previous installments. Now, inject it with steroids. That’s still not close to what will fill your eyeballs in Furious 7.

My only complaint? While the film concludes with a very moving coda involving its late star, Walker, F7’s other attempts at poignancy land with a decidedly big CLUNK. I’m looking at you, Diesel and Rodriguez. Unfortunately, the filmmakers’ attempt at creating a romantic storyline between the pair is 13 kinds of awkward, and the duo lack any kind of non-platonic chemistry. Brother and sister energy? Yes. Hot-love-interest energy? Omigodno.

But, really, WHO CARES?! Furious 7 is, in a word, FUN! Unapologetic, popcorn-movie, check-your-brain-at-the-door FUN! It’s big, bold, brash, loud, stupid, cheesy and a wild, wild ride. Forget about logic or reason; just strap yourself in and hold on.