Nubile young folks visit a big country house in the area that happens to have a very large red barn equipped with lots of large hooks dangling from ropes, pitchforks, machetes, and other sensible farming tools
By Lindaon September 14, 2013
0 Comments
Our Rating 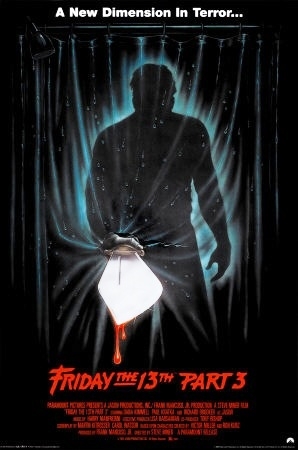 Now for the good stuff! Friday the 13th‘s second sequel was cleverly titled Friday the 13th 3: 3-D. This came out around the same time as a mini-resurgence of 3-D movies in the theaters (I personally remember seeing Jaws 3-D, a supremely crappy sequel most notable for starring Dennis Quaid and having a severed arm float out of the screen). This era of 3-D was watched through cereal-box 3-D glasses—you know, the ones with one red lens and one blue lens. This DVD release handily comes with a couple of these glasses if you choose to partake in the 3-D fun (luckily the disc has a 2-D option for when your head starts to hurt after about 5 minutes).

Part 3 shakes things up a bit. This time the action doesn’t take place at Camp Blood, or even Crystal Lake. Now the nubile young folks are visiting a big country house in the area that happens to have a very large red barn equipped with lots of large hooks dangling from ropes, pitchforks, machetes, and other sensible farming tools. Watch for the clean-cut girl who will survive this bloodbath (she was a little trickier to pick out this time, as our first guess got a fishing spear-gun through the eyeball). More importantly watch for her boyfriend.

OK, this one moment in Part 3 is worthy of its own paragraph. Why? Because of its jaw-dropping beauty. Our main girl’s corn-fed hunk of a boyfriend has an extended shirtless scene where he is hoisting a bale of hay on a pully from the second floor of the barn. The camera lingers on him and his sweaty chiseled body. He pulls. He hoists again. He wipes sweat from his brow and hoists again. Mother of all that’s holy. Among the three of us, two girls and a guy of multiple sexual persuasions, we were all agog at his perfect beauty. I know that the filmmakers were intending us to watch the bale of hay swinging from the rope in glorious 3-D, but jeez, talk about the perfect beefcake moment…

There are (I think) a solid dozen victims in Part 3, including country folk running the country store, the beautiful people (plus dorky friend) at the country retreat, and (the best part) a trio of bikers that the kids happen to cross while in town getting supplies. In this case, the bikers totally make this film watchable. The two men look like they’ve stepped out of the gang dance-off in Michael Jackson’s “Beat It” video, and their woman sidekick is a badass with big hair that looks like she could have a drum-off with Sheila E. And if you get none of these references, obviously you weren’t even born when this movie was in the theater (damn kids these days).

This isn’t a good movie by any means, but the Jason’s hockey mask is finally (finally!) introduced, and this is the first of the three that actually seems like they are having fun with the genre, throwing in as many gorey—yet funny—ways to off the characters one-by-one. 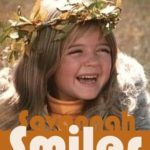 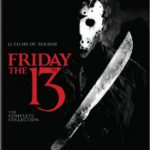