Something about a little girl in a field and…maybe a chimp? 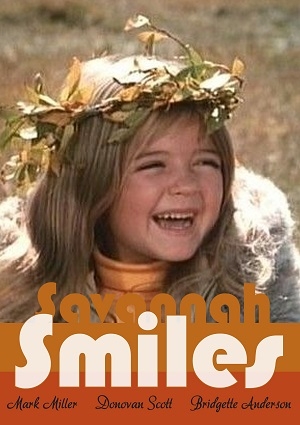 For some reason, the memory of my mom bringing Savannah Smiles home from the library during the winter of 1986 is burned into my brain. It’s stuck to an afternoon spent rearranging my bedroom and listening to Billy Ocean on the radio, but after all these years I had to admit that I couldn’t remember a thing about the movie itself. Something about a little girl in a field and…maybe a chimp? I decided I’d better get to the bottom of this, never imagining that an obsession was about to be born.

Right off the bat, I may as well admit that there is no chimp in Savannah Smiles. There’s nothing even remotely similar to a chimp, although she does get a puppy. And I should probably also admit that during the first few minutes of the movie, the whole thing looked so cheesy and low-budget that I thought about turning it off. But then Savannah herself (Bridgette Andersen) came onscreen and I was transfixed. I remembered this insanely adorable little girl, so I started googling – why did she look so familiar and what ever happened to her? Turns out she was in all things 80s from Family Ties to The Parent Trap II, but it was the “what happened to her?” that stopped me in my tracks. She died in 1997 from a drug overdose at age 21. Wait, what?! WHAT?

I was too stunned by this news to turn off the movie, which, luckily, gave it just enough time to improve. Tired of being ignored by her ambitious father and preoccupied mother, Savannah decides to run away. She meticulously packs her Snoopy suitcase and carefully writes a note explaining that she’s leaving. She then joins her cousins for an afternoon at the playground, but climbs into another car before it’s time to go. Awesomely, this run-down old beater belongs to two inept criminals, Bootsy (Donovan Scott) and Alvie (Mark Miller, father of Penelope Ann Miller), and the last thing they want to deal with is a kid. They try to shoo her away as nicely as possible, but Savannah’s having none of it. After they stand her on the curb and drive away, she comes running after their car, suitcase banging against her little legs. Seriously, who’s going to say no to that?

And so this unlikely threesome settle into an abandoned cabin for the night. Bootsy and Alvie are basically biding their time until they can get rid of Savannah, but she’s already adopted them, decided that they’re her friends, and is ready for some good times. As a viewer, I was sold on her the moment she answered the question, “What do you want for breakfast?” with “Chocolate milk, Cocoa Puffs, buttermilk, chocolate strawberries, peaches, Wheaties…”, then followed up with a surprisingly long and rather elaborate retelling of “Brer Rabbit and the Tar Baby” as a bedtime story. I totally don’t rewatch that scene on YouTube every day. I totally haven’t tried to memorize her lines so I can quote them around the house. Definitely not.

While Alvie has his sights set on collecting the reward money for Savannah’s return, Bootsy finds himself growing more and more attached to this funny little girl who wants nothing more than to enjoy being away from home. Ultimately they find it impossible to use her as a pawn in one of their schemes and instead take her out in the country for a day of picnicking and playing, ice cream and free puppies. For once, Savannah has the undivided attention she’s always wanted, and for the moment Bootsy and Alvie are free of their problems and their checkered pasts. It sounds sappy, but there’s a sad, slightly broken quality to these three, making the happiness they experience together all the more touching and bittersweet. Soon enough Bootsy and Alvie will be back in jail and Savannah will be home with her dopey, disconnected parents, but they will all have the memory of that sun-dappled afternoon.

I’m choking up just thinking about little Savannah’s fingers digging into Bootsy’s back as she hugs him goodbye, and the fact that Bridgette Andersen is no longer with us only makes it worse. There’s something captivatingly transparent about her performance – she’s never hammy, never tries to hard – she’s just this perfectly complicated, imaginative, quirky little girl who knows what it’s like to have it all and still be very, very lonely. Regardless of any flaws, Savannah Smiles beautifully captures the feeling of childhood longing that none of us really ever forget.