Galaxy Quest is laugh-out-loud hilarious, especially if you’ve been to a Star Trek convention or two like myself… or whatever…
By Lindaon April 27, 2015
0 Comments
Our Rating 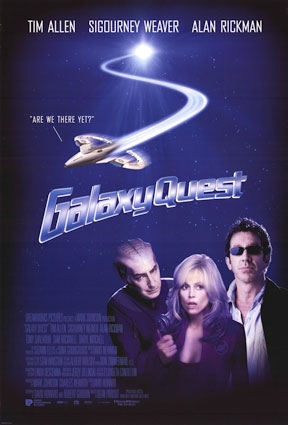 Tim Allen & Co. play aging actors who can’t live down their roles from a sci-fi TV show called Galaxy Quest that had aired years before (and had basically typecast them for the rest of their acting careers). Yep, try to guess the show being parodied here! Lately, the “crew” has been relegated to appearing at fan conventions and attending store openings dressed in their shiny jumpsuit costumes from the show.

One day, some rabid “fans” (dressed as aliens), kidnap the captain and crew, and bring them to their real spaceship (which they painstakingly modeled on the space-reruns of the TV signals from the original show). Turns out they are real aliens fighting an evil alien race… and who better to help them in times of trouble than the crew that they worship? “For God’s sakes, I’m an actor, not an engineer!”

I loved Alan Rickman’s bitter Spock-like character. Sigourney’s role was hilarious as well, especially because her actress-character was so conscious that she hadn’t really had a role of any importance on the TV show. I don’t want to give any of the jokes away, but it there are a LOT of good one-liners that had me guffawing.

The spoofing of the Star Trek world is all done in affectionate (as opposed to mean-spirited) fun. And strangely enough Galaxy Quest proves to be better at making a Star Trek movie than Star Trek itself. All the elements are right on, making the movie not only a terrific comedy for broad audiences, and a goldmine of fun for those in the know.

Galaxy Quest’s Deluxe Edition 10th Anniversary DVD includes a slew of featurettes and extras, including “Historical Documents: The Story of Galaxy Quest”, “Never Give Up, Never Surrender: The Intrepid Crew of the NSEA Protector,” “By Grabthar’s Hammer, What Amazing Effects,” “Alien School: Creating the Thermian Race”, deleted scenes, a Thermian Audio Track (yay!), and others goodies. One of my favorite tidbits was learning that when Sigourney Weaver exclaims, “Well, screw that!” when encountering the body-squishing “chompers”… you can see by her lips that she is clearly saying, “Well, fuck that!” (dubbed to avoid a harsher rating). Even Star Trek film writer Nicolas Meyer is included (as he reiterates that Trekkers are insulted by the term “Trekkies”). All the major players from the film are included in interviews as they look back fondly at the film and its surprising success. And “Sigourney Weaver Raps” has her and some of her co-stars gangsta-rapping a birthday greeting to her agent.