It may be called The Fighter, but it is the supporting cast that steals this movie right out from under the fighter himself, Mark Wahlberg.
By Lindaon April 27, 2015
0 Comments
Our Rating 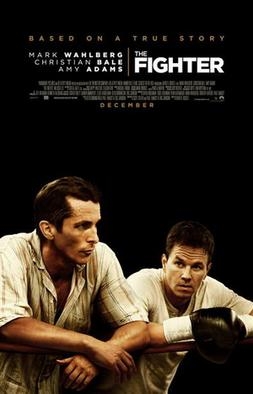 I totally enjoyed watching The Fighter, but walked away from it chewing on all the characters, except, well, the fighter himself. Poor Marky Mark, bless his heart, his limited acting skills, and his excellent abs and eyebrows… His Micky Ward was so overwhelmed on screen at all times–if not in the boxing ring itself, then by all the people around him, especially his family–that he is the least memorable thing about the movie.

Now, let’s back up a second. Micky Ward (Wahlberg) and his older brother Dicky (Christian Bale) are inseparable (in an “I’ve got your back” way) best buddies in working class Lowell, Massachusetts, and spar at the local boxing gym. Micky is working hard to get his big boxing break, see, just like his brother Dicky did back in the day when he knocked down Sugar Ray Leonard (making him a local legend, at least in his own eyes). They work hard, they play hard. They’re going to the championship together!

Oh, wait a second. That would be the Disney-fied version, because you see Dicky is a complete crackhead, which is obvious the second Christian Bale is on screen with his motormouth mannerisms, haunted sunken face, and twitchy energy. Dicky also has a camera crew from HBO following him around. “They’re making a movie about me!” he crows to the locals, telling them it is going to be all about his boxing comeback. From the uncomfortable look on the film crew’s face, you quickly start to doubt that Dicky’s comeback is not the focus.

Then there is Micky and Dicky’s mom Alice, aka Micky’s boxing manager, played by the fantastic Melissa Leo, who just blows on screen in her hairsprayed, blonde ‘do, whipping all the other people in the room to submission. She is often surrounded by her posse of equally hairsprayed, tall-banged adult daughters (seven of them!), who serve as bitter-faced chorus to all the screaming family proceedings. Fantastic!

And, in the meantime, Micky gets a girlfriend name Charlene (Amy Adams), who is a tough-girl bartender, so she can also trash talk with the best of them (but still seems nice, in that Amy Adams way). Micky loses some humiliating fights, Dicky gets out of control, Alice gets out of control, and it actually takes Charlene to say that maybe his family might actually be holding him back. Ouch for the moment of truth.

But the truth about The Fighter is that it is a solid, kind of typical sports-underdog movie that just happens to have lucked out with an outstanding supporting cast. Seriously, there is a moment where Micky is introducing Charlene to the family (ALL of them), and I swear, it looked as though Mark Wahlberg and Amy Adams were dropped into a documentary with a living-room full of bonafide crazy. If you like sports movies, you’ll dig The Fighter… As for the rest of you? If you want a lesson on how to score an Oscar nomination, see it to watch Christian Bale and Melissa Leo show you how its done.