Sure, sharp suits, hot dames, a scenery-chewing bad guy, and lots and LOTS of guns make a gangster movie… but you need more than that to make a GOOD gangster movie.
By Lindaon January 11, 2013
0 Comments
Our Rating 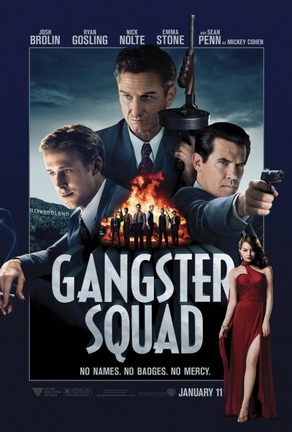 The Hollywood(land) sign in the Hollywood hills is as iconic in the movies as it is in real life. Gangster Squad opens up with a, well, memorable scene with the ubiquitous sign as the backdrop: A man gets halved—not quartered, mind you… HALVED—by being pulled apart between two cars. NICE, that gangster Mickey Cohen!

The era is the late 1940s, post-World War II, where a lot of manly men seem to still be stewing and milling about, looking for a reason to kick some ass. East-Coast-style gangster thug Mickey Cohen (Sean Penn) has muscled his way into Los Angeles, with full intention of controlling the town. The local LAPD is none-too-pleased (except for the cops that have been handily paid off by Cohen to look the other way). Sergeant John O’Mara (Josh Brolin) has had enough of trying to stop Cohen the legal way, with warrants and whatnot, so, with the verbal agreement of his boss (Nick Nolte, with his bag-of-rocks voice) O’Mara assembles a team.

Like just about any movie where a motley crew joins together to fight the bad guys, Gangster Squad has your typical mix: the cool-headed sharpshooter (Robert Patrick), the nerd (Giovanni Ribisi), the black guy with connections to the “other” side of town (Anthony Mackie), and then, you know, a Hispanic guy (Michael Peña), I guess to realistically acknowledge that the story takes place in L.A. These guys are all noble, good cops that are not afraid of busting heads. But that’s about all you get.

The story, instead, invests on the pretty boy cop (Ryan Gosling), I guess because he’s pretty. He’s so pretty that he is dating Mickey Cohen’s girlfriend Grace (Emma Stone), which seems to be waaaayyy too easy considering the context of the film. Gosling and Stone have a nice chemistry (as they showed in Crazy Stupid Love), but their plot just isn’t interesting enough to warrant any emotional investment. In the same way, Brolin’s cop has a long-suffering (of course) pregnant wife at home that is given a little screen-time, so she is there just as the token way to make our square-jawed leader seem more than a killing machine.

Director Ruben Fleischer is way more interested in making the next Untouchables or Scarface or GoodFellas, replete with lots of violence-porn and LOTS of gunfight. He apes everything from the slow-motion shootouts to the raids gone wrong, and gives lots of face-time to a scenery-chewing villain. But unlike those other movies, which have style and substance, all Gangster Squad cares about is looking good… from the pretty leads, to the nice suits, to the admittedly stellar art design. I need more than that. 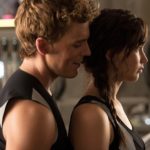