A teen from the ghettos of India finds himself at the center of a cheating scandal when he reaches new game-show heights in this lively and colorful drama from director Danny Boyle. 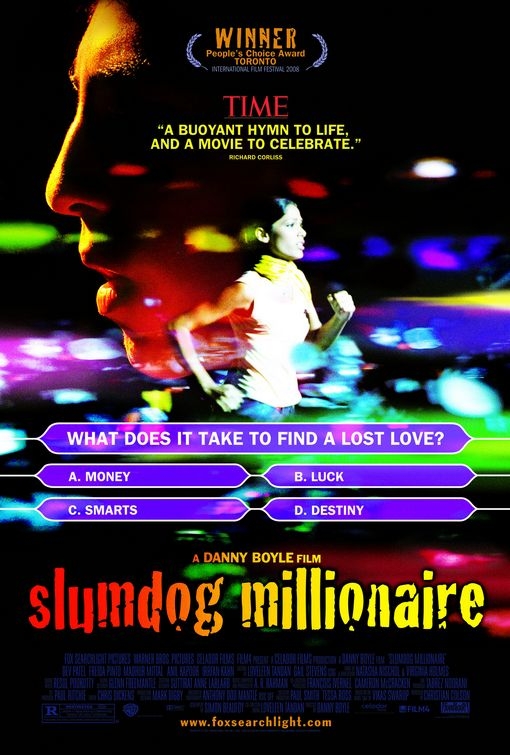 The winner of the audience award at the Toronto International Film Festival and ultimately the Oscar for Best Picture, director Danny Boyle’s latest offering combines his trademark frenetic style (see: Trainspotting) with a distinctly Hollywood-esque “little engine that could” type story, and the result is a colorful, enjoyable, occasionally harrowing and all-around entertaining drama with romantic undertones.

Co-directed in India by Loveleen Tandon, and told largely in flashback via a police interrogation, the film follows Jamal Malik (Dev Patel), a contestant on India’s version of Who Wants to Be a Millionaire, who’s poised to win an unprecedented 20 million rupees when he’s suddenly suspected of cheating. The host of the program (Anil Kapoor) cannot believe that an uneducated former orphan-child of the slums could possibly know all the answers to the questions he’s being asked, so Jamal is hauled away to explain himself to a police inspector (the always wonderful Irfan Khan, most recently seen in The Namesake). As he sits, beaten and tortured by the authorities and maintaining his innocence, Jamal recounts – question by question – the specific life experiences that led to him knowing each answer.

With rapid-fire editing, hand-held camerawork and plenty of weird camera angles (both of which combined led me to close my eyes from time to time because I was getting dizzy), and blessed with some gorgeous cinematography, the film takes us back through Jamal’s troubled childhood and young adulthood. As a young boy, he and older brother Salim get up to mischief, until a riot claims the life of their mother and the duo are left to fend for themselves on the streets. They meet a little girl named Latika, and the trio form a pint-sized “Three Musketeers,” looking out for one another despite the fact that fate and the world repeatedly separate them and reunite them through the years. But what radiates off the screen is Jamal’s love for Latika, a love that eventually lands him on Millionaire and on the road to financial freedom.

While the film occasionally drags and could probably have been about 15 minutes shorter, and even though the question-by-question device starts off seeming like it might get very old very quickly, the underlying story is compelling and, more importantly, the performances of Slumdog’s young cast truly make the movie. Alongside Patel, who’s equal parts sad-puppy and super-smart success, there’s Madhr Mittal as the adult Salim and the stunning Frieda Pinto as the adult Latika, both of whom turn in some fine supporting work. Kapoor’s alternately smarmy and charming TV host is a delightful exercise in duality, and Khan’s initially skeptical and gradually engaged cop makes for a great audience for Jamal’s storytelling. It’s not easy to create a memorable character out of someone who’s basically sitting and listening to another character recount a story, but Khan makes it work.