It’s a rare feat to successfully pose a moral question against the backdrop of a truly stumping mystery, but Gone Baby Gone pulls it off.
By Jenniferon December 21, 2013
0 Comments
Our Rating 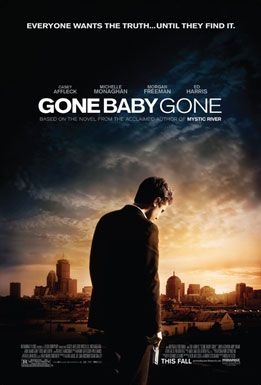 I’m not a fan of the Affleck boys and their Boston-centric, f-word laden style of moviemaking, but I have to confess that I was mightily impressed by Gone Baby Gone. The fact that they had a solid story by Dennis Lehane as a starting point didn’t hurt, but you’ve got to give them credit for making it into a compelling nail-biter of a movie. It’s a rare feat to successfully pose a moral question against the backdrop of a truly stumping mystery, but Gone Baby Gone pulls it off.

Patrick (Casey Affleck) and Angie (Michelle Monahan) are partners in life and in their work as private investigators. They are contacted by the aunt (Amy Madigan) of a little girl named Amanda who has disappeared from her bedroom, but they’re not sure that they’re ready for this sort of challenge. It’s a highly publicized case, and the cops are all over it, but the stakes are awfully high. Angie is particularly concerned about finding the little girl in a dumpster, and the impact it will have on her life. It’s a lot to deal with, but they rise to the occasion, and as Angie feared, their lives are forever altered.

Though Patrick and Angie team up with a badass crew of cops including Ed Harris, John Ashton (Taggart from Beverly Hills Cop!) and headed by Morgan Freeman, they quickly begin uncovering things that the other investigators have missed. Together it seems they’ll actually be able to figure out what happened and bring Amanda home, but just when all the pieces are about to come together, everything falls apart…Or does it?

In a bizarre turn of events, Patrick gets a second chance to do right by Amanda, but he’s left in a heart-wrenching predicament. Does he return her to her crappy, irresponsible mother (played brilliantly by Amy Ryan) and bring down an otherwise upstanding man, or does he leave well enough alone? The decision has the power to make or break his relationship with Angie, and will determine the future of an innocent little girl.

It’s a painful choice to make, and in the end there is no knowing whether or not he did the right thing. Who has the right to decide that we’d be better off without our incompetent families? And ultimately, isn’t it a question of fate? Our destiny is determined by where we are born and the people we call our parents. Should anyone have the power to second guess that? Though Gone Baby Gone takes place in a world most of us will be happy to leave behind, it raises thought-provoking questions that will remain with us long after the credits have rolled. For that, the Affleck boys must be commended.

Extra features include audio commentary by writer/director Ben Affleck and co-writer Aaron Stockard, deleted scenes with optional commentary, and a “thought-provoking” extended ending. The featurette “Going Home: Behind the Scenes With Ben Affleck” shows how Affleck used familiar haunts and locals to create the realistic feel of the film, and “Capturing Authenticity: Casting Gone Baby Gone” takes a look at the process of lining up the perfect players to pull off the script. Amy Ryan in particular is so believable that it’s hard to believe she exists outside of the film. I could imagine her returning to a rundown neighborhood at the end of the day, knocking back a few beers on the sofa, and eventually noticing that her small child has been home alone all day and is now waiting for dinner. Interview footage would indicate that she’s nothing like her character and leads a perfectly respectable life. Now that’s casting.