Imagine if the hip, hot granddaughter of Logan’s Run married The Rock. Their offspring would totally be The Island.
By Jenniferon December 21, 2013
0 Comments
Our Rating 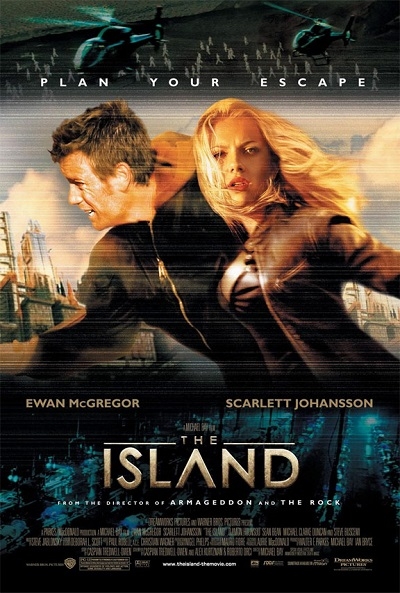 Honestly, when my friend started raving about The Island this summer, I thought she might actually be stark raving mad. I just didn’t see what could be so great about a sci-fi movie starring Scarlett Johansson and Ewan McGregor. I don’t mind Scarlett, but I think he really puts the “ew” in Ewan. And sci-fi? There’s another “ew”. No reason to get in line for that one, right? Wrong. Imagine if the hip, hot granddaughter of Logan’s Run married The Rock. Their offspring would totally be The Island.

Scarlett and Ewan star as Jordan Two Delta and Lincoln Six Echo. They are clones of real people living in a cloistered community with the impression that the outside world is contaminated and uninhabitable. They have no idea that they’re clones, or that the only reason they exist is to grow body parts for the rich and famous. It’s the future, and it’s not stylish to grow old and die. When things wear out, you just harvest what you need from your clone.

Trouble arises when Lincoln begins to question life in the bubble. How exactly do things work? Who cooks the meals he receives each morning? Who launders his clothes and puts them back in his drawer? Why do their uniforms have to be white? Why does he keep having nightmares? Even wondering about these things makes Lincoln a liability and a target. Clones aren’t supposed to think too hard. They’re just there to keep the organs warm.

When Ewan voices some of his concerns to the doctor (a wonderfully evil Sean Bean), he’s given a “nice” medical test that should get to the root of the problem. In other words, little ball bearings with feet crawl into Lincoln’s eyeball for a memory scan. Icky! Looks like it’s time to get out of this town!

The bright spot in the lives of the clones is “The Lottery” which offers the winner an opportunity to go live on The Island. Visions of fresh air and warm breezes keep the clones hopeful, but Lincoln discovers a much darker truth about The Island, similar to the truth about Sanctuary in Logan’s Run. When his friend Jordan’s number comes up, Lincoln decides it’s time for some free thinking, and together they manage to escape.

Will Jordan and Lincoln survive? Will they be able to save the others? The race to the finish is a wild, suspenseful ride, complete with chases, romance, and witty dialogue. Steve Buscemi, Djimon Honsou, and Michael Clarke Duncan offer up solid supporting performances, and there’s even a fun appearance by Shawnee Smith. The two leads are surprisingly endearing as innocent but clever clones.

With Michael Bay (Armageddon, The Rock) at the helm, the nerd is beaten right out of this sci-fi thriller. The Island is like the nerd’s jock cousin—the one who’s funny, energetic, and good with people. Sure the special effects are fun, and the carefully crafted plot bears a message about our obsession with youth and appearance, but it’s testosterone driven action and roaring pace that make it impossible to resist the momentum.