They say there’s a fine line between genius and insanity, and I fear Miss Potter walked it every day.
By Jenniferon December 21, 2013
0 Comments
Our Rating 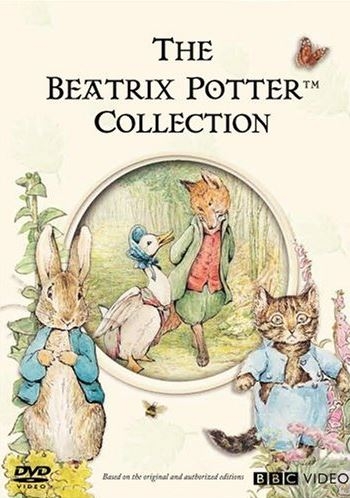 It’s easy to imagine a little child passing a quiet afternoon in the company of The Beatrix Potter Collection. It smacks of rainy days spent with toys strewn over the floor and the TV on, and the animation matches Potter’s original drawings nicely. It’s a comprehensive collection that represents the characters we all remember (Peter Rabbit, Jemima Puddle-Duck, Mrs. Tiggy-Winkle, Mr. Jeremy Fisher, etc.), but like all of Potter’s work, there’s something slightly off about the whole thing.

Each episode is introduced by a short live-action vignette showing a fictional Beatrix Potter traipsing through the countryside (rife with animal friends, of course), then settling in to write in her cottage. It gives us a taste of the author’s world, but quickly gets tiresome. After a point, you just want to cut to the chase, and it’s not like Potter was the portrait of normality. She breezes in and out of the house while a live rabbit (called Peter, of course) twitches his nose from a tabletop, and it’s all you can do not to scream at her. It’s freaky enough to keep a rabbit loose in the house, but for goodness sake, let it down off the table while you do your errands! Luckily, a quick press of the skip button brings us to the start of the stories, and the magic of DVD saves us from too much rigmarole.

The episodes themselves are well done, but purists will wince at the combination of storylines and find themselves saying things like, “Lucie so totally did not speak to Mr. Jeremy Fisher on the way to Mrs. Tiggy-Winkle’s house! And Mrs. Tiggy-Winkle never sounded like a toothless hag gnawing on cellophane when I imagined her!” Like Mrs. Tiggy-Winkle’s voice, a number of episodes are downright creepy, even when they follow the books exactly.

I’ll never forget finding a little copy of The Roly Poly Pudding in my Easter basket when I was six. I was so excited to hear a new Beatrix Potter story, but the excitement quickly turned to horror as Tom Kitten hid himself in the chimney and discovered piles of old bones lingering in the stinky labyrinth-like passages. He was then kidnapped by rats, tied up, and rolled in dough for a pudding (with an actual rolling pin!). It’s all so evil that you practically want to scream. To this day, I’m convinced that there are bones up our chimney, even though I know full well that there are no weird rat ledges for them to be on. I wondered if the cartoon version of this story would be as icky as the book, and sure enough, it’s enough to make your skin crawl.

So often Potter makes animals as relatable and endearing as humans, then has some bizarre and unexpected fate befall them. In real life, squirrels get their tales ripped off and rabbits are chased by angry gardeners all the time, but generally not after we’ve grown attached to their sweet little outfits and adorable way of speaking. There’s something sadistic in the way she endears us to the animals, then tortures them. Oh, and the moral to The Roly Poly Pudding? That’s why Tom Kitten is afraid of rats. Well crap, Beatrix, I would be too. In fact, you kind of scare me yourself. They say there’s a fine line between genius and insanity, and I fear Miss Potter walked it every day. True to form, this DVD collection does too.