Though its deliberate pacing is verging upon snoozy for the impatient, viewers will be ultimately rewarded by the subtle complex threads that weave through the story of one man’s ill-advised actions to ensure the best future for his daughter.
By Lindaon January 27, 2018
0 Comments
Our Rating 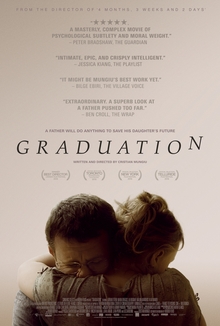 I’m going to say this right off the bat: About half an hour into Graduation, I found myself falling asleep. The style of this film is very slice-of-life, almost documentary-like, following this one man around as his world starts slowly falling apart around him (much by his own doing). With very little notable soundtrack or visual tricks, it seemed very… authentic (and I hate that over-used word). It is a raw style of filmmaking that invoked the Dogme 95 aesthetic, but with much better cinematography and acting. Despite my early snoozing, by the end of the film I was impressed at how director Cristian Mungiu (4 Months, 3 Weeks, 2 Days) managed to make this unpredictable film seem almost ordinary.

Romeo (Adrian Titieni) is a 40-something doctor with an attractive wife and a smart teenage daughter. But his day starts out badly when a large rock crashes through their apartment window. The day gets worse after he drops his daughter off at school, only to find out that she has been sexually assaulted (but not raped, he is adamant to clarify) by a stranger moments after he drove off. She has her exams the next day, and he knows how important it is that she do well in order to get a scholarship to Cambridge University in the UK. Romeo knows it is his daughter’s way out of Romania (he has his own regrets about his life turned out), and wrings his hands with worry that the assault will ruin her concentration and her focus (ya think?). He decides that he’ll do anything he can to “help” her get the scores that she needs.

For a while, it wasn’t clear if Graduation was meaning to portray its main character as a modern-day Job, where everything goes wrong for one hapless, innocent man. But Romeo, we learn, has been balancing an imbalanced life for quite a while. His phone rings constantly, but he never answers, especially if someone else is nearby. He has a mistress who wants him to make a decision about their future. He has a sad wife that makes him sleep on the couch. And his way of “helping” people proves often to be not very helpful. His downfall is much of his own doing, and it is fascinating to watch it unravel, even if you don’t think he deserves to suffer too badly.

I wasn’t exactly sure where Graduation was going, and it certainly takes its time getting there (at what feels like a long 2+ hours). The pieces of the puzzle are laid out gently to the viewer, but not necessarily put together with a clean explanation. The filmmakers want you to put the pieces into place yourself. I found myself chatting with others after the film, who pointed out theories and possible story threads that I had not picked up on. What could have been a straightforward revenge story is instead subtly complex, making you want to chew on the clues that you missed with a good post-film discussion.