Let’s get one thing out of the way right of the bat: Logan is a suuuuuper-violent, super-bloody “superhero”(ish) movie. If the R rating doesn’t make it clear enough, this is not a movie for kids. Right from its opening frames, it’s abundantly clear that, in tone and execution, it’s vastly different from any other X-Men franchise film before it.

And while I’m sure that shift in gears will appeal to some, it really put me off. 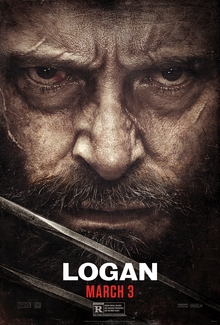 Set in the year 2029 – when, apparently, nothing (not technology, not clothes, not cars, etc.) really looks any different than it does in 2017 – the film centers on an aging, no-longer-as-sharp-as-he-used-to-be-Logan (Hugh Jackman), who’s traded saving the world for being a glorified Uber driver, drunkenly shuttling newlyweds, coeds and the filthy rich around, and occasionally pulling out his adamantium claws to kick the asses of random ne’er-do-wells. Whatever money he earns goes towards keeping his dementia-riddled old friend Professor X (Patrick Stewart) and their mutant-friend-turned-caregiver Caliban (Stephen Merchant) alive and hidden away in the Mexican desert.

Things in Logan’s wildly depressing life are turned on their head when he finds himself saddled with a Mexican orphan named Laura (Dafne Keen), who is very quickly revealed to be a mutant cloned from Logan’s DNA (X-23, to be exact, for any comic-book fans) and raised (with others of her ilk) to be pint-sized killing machines. Problem is, she was liberated from her captors and is now being ruthlessly hunted by the organization that made her, led by the creepy Dr. Rice (Richard E. Grant) and his metal-mitted mercenary, Pierce (Boyd Holbrook). Soon, Logan, Laura and Xavier are on the run, fleeing towards a mythical mutant safe haven near the Canadian border and pursued by their take-no-prisoners foes.

The film is basically two hours of brutal violence and chase sequences, one after another, with action taking the place of story in most scenes, and with only the occasional narrative glimmer of something other than another villain eviscerated in a creatively gory way. Honestly, the swath of bloodshed and shattered bodies Logan leaves in his wake is vast and exhausting. For him, and for the audience. As the closing credits rolled, my movie-going pal turned to me and, referring to what we’d just seen, sarcastically said, “Wow. Not enough head trauma!”

Yet while the film may be lacking in heart and hope (seriously, it’s a big downer from start to finish), it does boast some strong performances amid the carnage. Stewart’s Alzheimer’s-stricken X is sweet and sad, Jackman’s beaten-down and increasingly unglued Logan feels like a natural progression for the character (given the crappy hands he’s been dealt, literally and figuratively), and Merchant makes for an odd but effective casting choice as the albino mutant tracker.

And little Dafne Keen holds her own against the big boys, which is good considering any potential spinoff film might rest on her petite but lethal shoulders.

The Blu-ray release contains a feature commentary by writer-director James Mangold, deleted scenes, and over an hour of behind the scenes featurettes about the making of the film.