As Hot Docs 2015 draws a close, I find more and more directors campaigning for Audience Award votes – but why? I don’t recall anyone doing it in the first few days, but now it’s happening with increased frequency. I have to wonder if the fest’s decision to post the AA’s current daily standings on their official website is somehow causing filmmakers to repeatedly check where they rank, as though that’s suddenly what counts, and to then feel the need to boost their standing by lobbying for votes. It a shame, because feeling pressured by a filmmaker to vote immediately detracts from my enjoyment of their film and makes me not want to vote. And, based on conversations I’ve had with other folks, I’m not alone.

As an aside, I think every festival attendee, regardless of how many films they see, be given ONE VOTE to cast at the very end of the festival, and which they can cast for the ONE FILM they loved the most. Divide the total number of votes for a given film by the total # of tickets sold for that film to get a percentage. Highest percentage wins. Period.

It levels the playing field, eliminates this day-by-day jockeying by the filmmakers and all the post-screening ballot tallying, it gets folks out of venues so much faster, and – most importantly – it makes the process entirely transparent for the audience. As it is now, the math that goes into deciding the winner is a mystery; with the one-vote-only process, it’s cut and dry.

Yesterday’s films shared many qualities: both were Canadian, both were directed by women (yay!), both dealt with the natural world in some way, and both were really really great. 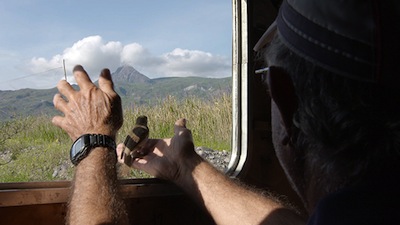 First up was The Messenger (7/8), director Su Rynard’s terrific film about the plight of the world’s songbirds, whose numbers are declining drastically every year. Criss-crossing the globe to speak to ornithologists, scientists, bird lovers, conservationists and even a rather self-satisfied hunter in France, the doc probes the assorted obstacles migratory songbirds face all over the planet. Light pollution, building collisions, climate change, predators, pesticides – these beautiful little birds have to run (well, fly) a veritable gauntlet of doom to get from A to B unscathed! More troubling, the issues affecting the flock sizes of these species reflect bigger-picture problems relating to how people are treating the planet. If songbirds are dying, you can bet that whatever’s killed them is, directly or indirectly, a result of something that isn’t good for humans, either.

Stunningly gorgeous cinematography complement’s Rynard’s perfectly paced, informative film that’s a must-see for anyone who loves, or cares about, birds. Or the planet. Or life, in general. 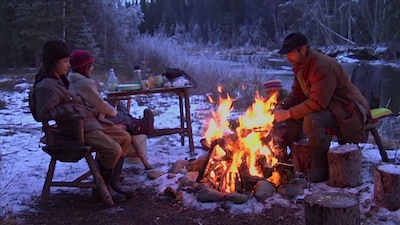 My second film of the day was just as gorgeous and just as reverent toward the natural world. When director Suzanne Crocker and her husband took their three kids (and two cats and a dog) and left city life to move into a cabin in a deeply forested corner of the middle of nowhere – with no electricity, no running water, no clocks and no neighbours for miles and miles – she decided to film their nine-month adventure (using boat batteries to keep her cameras charged). The result is All the Time in the World (8/8), a heart-swellingly wonderful account of togetherness, ingenuity, creativity and invention, and a telling look at how letting go of technology can strengthen – not compromise –connection.

Blessed with animated, articulate kids and a stunning backdrop in the bush of the Yukon, Crocker’s film is straightforward, heartfelt and authentic, never cloying or preachy – there’s nary a hint of “everyone would be better off if they did this!”-ness to it. The audience I was with was fully into it, too, laughing uproariously, gasping accordingly (a run-in with a black bear is one of the most suspenseful things I’ve seen at Hot Docs this year!) and being unapologetically charmed by the doc’s hugely appealing subjects – all of whom were on hand for a fun and lively post-film Q&A.