Due to some reshuffling of my planned festival schedule over the past week, I wound up with only one film on the final Saturday of the fest. Thankfully, it was a good one. (And it was preceded by me enjoying a tasty ice cream cone, which makes any festival experience that much better.)

The doc – which also turned out to be my final screening at Hot Docs 2015 – was Out to Win (6/8), director Malcolm Ingram’s valuable history lesson on LGBT athletes and their contributions to the world of sport. More importantly, the roles they (and their respective coming-out experiences) have had on subsequent generations of gay and lesbian athletes. Anchored in the story of NFLer Michael Sam – whose 2013 revelation about his sexuality was groundbreaking, both for its honesty and because it took place before the following year’s NFL draft – the film features interviews with a number of legendary (and gay) sports figures, such as Martina Navratilova, Billie Jean King, John Amaechi and Jason Collins, who all discuss the challenges and benefits of being true to themselves. 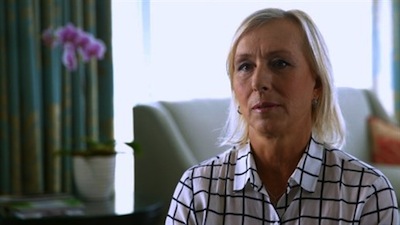 The film also profiles a number of athletes with whom I was admittedly less familiar, including Billy Bean (first openly gay Major League Baseball player) and David Kopay (an NFLer who’s credited with being the first pro athlete to come out… back in the 1970s!), and members of the next generation of gay athletes, including a pair of young lovebirds stepping into college careers already out and proud, and Canadian hockey player Charline Labonté, whose public coming out actually takes place on camera during the film.

A solid look at the changing tides in a community that, until recently, hasn’t really been super-accepting of, or open to, out lesbian and gay members, Out to Win will make an excellent addition to education programs in schools. Its kick-ass first few minutes, set to Queen’s “We Will Rock You,” sets a winning tone to boot. My only issue was the overt marketing for Nike that happens throughout – having various interview subjects casually decked out in Nike’s #BETRUE rainbow shirts, and then covering the Nike-sponsored conference, started to feel very much like a giant commercial, and an obvious PR effort to sell more gear (“look at us! we’re inclusive! buy one of these shirts for just $25!”) rather than a genuine social-justice movement on the part of the company.